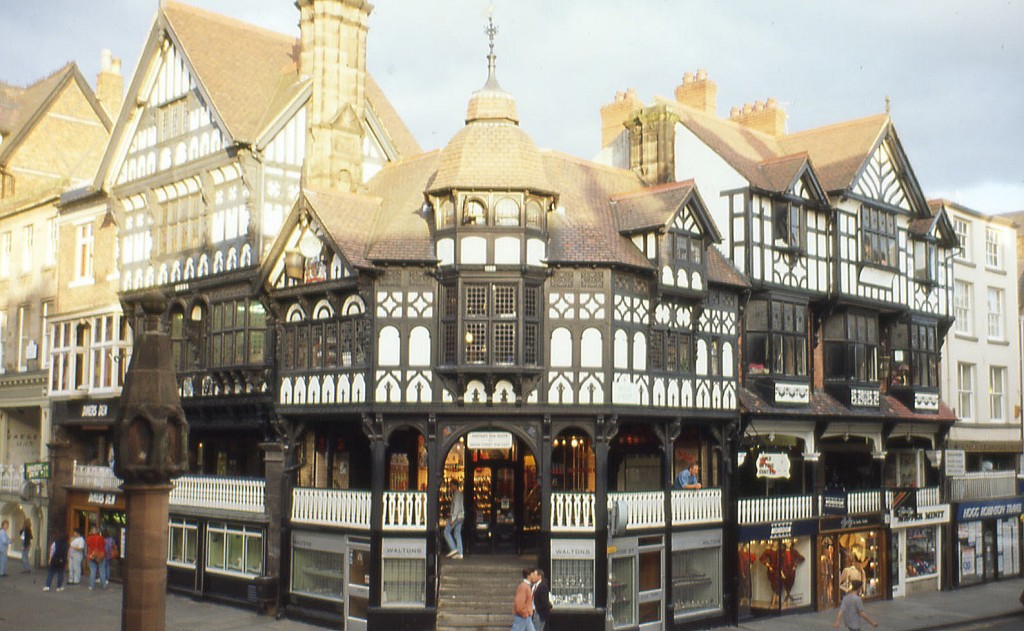 The city of Chester is celebrated for its black-and-white architecture, particularly the distinctive Rows, a system of split-level street frontages along the four main streets, apparently created in the thirteenth century on the remaining rubble of the Roman city of Deva.

The Rows buildings contain visible remains of medieval and older structures, making shopping a distinctive experience.  In fact much of the black-and-white architecture is Victorian or later.

As far back as the 1850s, writers in the early volumes of the Chester Archaeological Society Journal drew attention to “the rich and lively façades, the curiously carved fantastical gables, which distinguished the brief but gay rule of the Stuarts” and campaigned vigorously for their restoration.

So, when buildings such as Bishop Lloyd’s House (1615), God’s Providence House (1652) and the Leche House (late-17th century) reached the point of physical collapse, their timbers were retained and incorporated in the rebuilding.

It was ever thus.  The magnificent classical brick façade of the Booth Mansion (1700) on Watergate Street conceals considerable remains of two timber-framed medieval houses dating back to c1260-80.

The buildings which celebrated Chester on the Royal Mail 7-pence stamps for European Architectural Heritage Year in 1975 at The Cross were in fact by T M Lockwood dating from 1888 and 1892.

John Douglas in particular built much in the same style from scratch.  His Shoemakers’ Row on Northgate Street was begun in 1897.  It is beautifully detailed, with an unusually proportioned figure of Edward VII that could pass for George V.

This process of sensitive preservation continued after the Second World War, focused by Donald W Insall & Associates’ survey of 1968 and energetically monitored by the Chester Civic Trust: http://www.chestercivictrust.org.uk.

Some conservation battles resulted in defeat, and Chester has its share of regrettable post-war architecture, but its ancient charm is remarkably intact, powered by an economic necessity that was obvious as far back as 1857:

But we earnestly warn our fellow-citizens, that if Chester is to maintain its far-famed celebrity as one of the “wonder cities” of England,– if the great European and Transatlantic continents are still to contribute their shoals of annual visitors to fill our hotels, and the not too plenteous coffers of our tradesmen, one course only is open to us.  We must maintain our ancient landmarks, we must preserve inviolate our city’s rare attractions,– our quaint old Rows, unique and picturesque as they certainly still are, must not be idly sacrificed at Mammon’s reckless shrine!

The 48-page, A4 handbook for the 2009 Historic Chester tour, with text, photographs, and a reading list, is available for purchase, price £15.00 including postage and packing.  To view sample pages click here.  Please send a cheque, payable to Mike Higginbottom, to 63 Vivian Road, Sheffield, S5 6WJ.