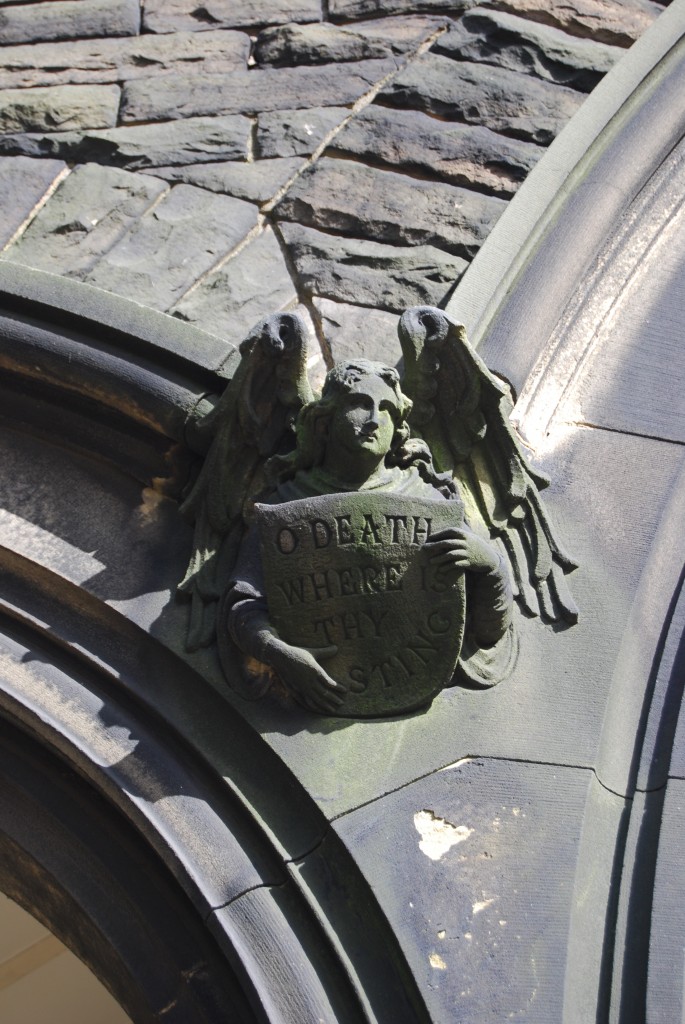 I’ve known Tinsley Park Cemetery, Sheffield, all my life, because my maternal grandfather and a bevy of Salvation Army aunties and uncles lie there.  When you visit a cemetery for a funeral, or even simply to tend a grave, as my mother and grandmother did when I was little, you don’t take notice of the surroundings.

The cemetery was opened in 1882 by the Attercliffe Burial Board to supplement their earlier cemetery adjoining the burial ground of Christ Church parish church, a Commissioners’ church built in 1826 and demolished after it was ruined in the 1940 Blitz.

In recent years, when I’ve found my way to Tinsley Park Cemetery, I’ve been intrigued by the quality of the architecture of the funeral chapels, a typical pair – one for the Church of England, the other for the Nonconformists – with an archway, a timber loggia, a clock in the gable and twin bell-turrets.  Each of the arches of the carriageway is decorated with angel headstops carrying Biblical mottoes.

The superintendent’s house incorporated a boardroom for meetings.

The cemetery was designed by a local practice, Holmes & Johnson.  Samuel Furness Holmes (1821-1882) was essentially a civil engineer:  he had been a highway surveyor and was Borough Surveyor from 1864 to 1873.

It’s likely therefore that the architectural work was done by his partner, C H Johnson, about whose career and work I’ve so far been able to trace nothing of any substance.

The Burial Board was taken over by the city in 1900, and Tinsley Park Cemetery remains under the care of what is now called Sheffield Bereavement Services:  https://www.sheffield.gov.uk/caresupport/bereavement/cemeteries-directory.html?showdetails=Show&uuid=b11e9afa-d9d8-4ee6-b005-b3ef498370f7&isDirectorySearch=true.  The Anglican chapel is still available for funeral services, while the Nonconformist chapel is a store.

Tinsley Park Cemetery is included in the itinerary of the ‘Cemeteries and Sewerage: the Victorian pursuit of cleanliness’ tour, based in Sheffield, September 17th-21st 2020.  For further details of the tour please click here.