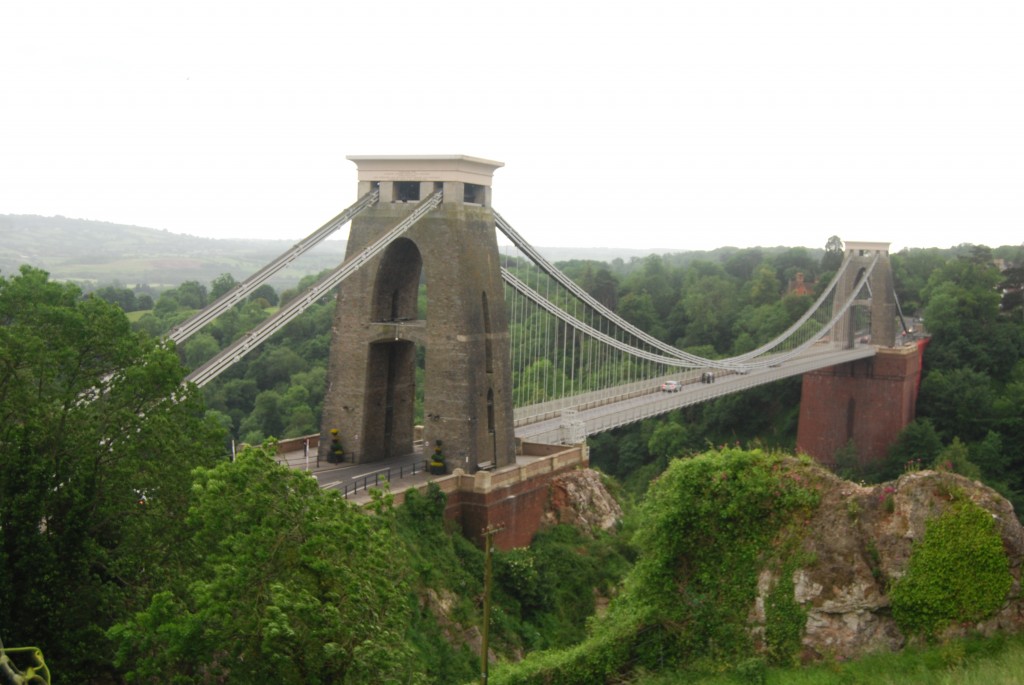 The first high-level crossing of the Avon Gorge at Bristol was not, in fact, Isambard Kingdom Brunel’s suspension bridge, but a wrought-iron bar, installed in 1836 when bridge-building was about to begin, a thousand feet long and 1½ inches thick, suspended two hundred feet above the River Avon, to carry a basket for transporting materials hung from a roller.

Brunel made the first trip across (after his newly-wed wife, Mary Elizabeth Horsley, declined the opportunity) and got stuck halfway when the bar dipped.  He shinned up the suspension ropes to free the pulley and reached the opposite bank without further difficulty.

By 1843, with £45,500 spent, only the piers had been completed, linked by the single iron bar:  work stopped – to Brunel’s lifelong disappointment – and the unused suspension chains were sold and incorporated in his railway bridge across the Tamar at Saltash.

L T C Rolt, in his biography Isambard Kingdom Brunel (1957;  revised edition with an introduction by Angus Buchanan 1990), reports that when construction of the bridge stopped for lack of funds, the Clifton Bridge Company collected £125 in fares from members of the public who wished to ride across in the bucket.

The bridge as we know it was completed, to a variant of Brunel’s original design, in 1864 using the chains from another of his suspension bridges, across the River Thames at Hungerford.

1 thought on “Crossing the Clifton Gorge”