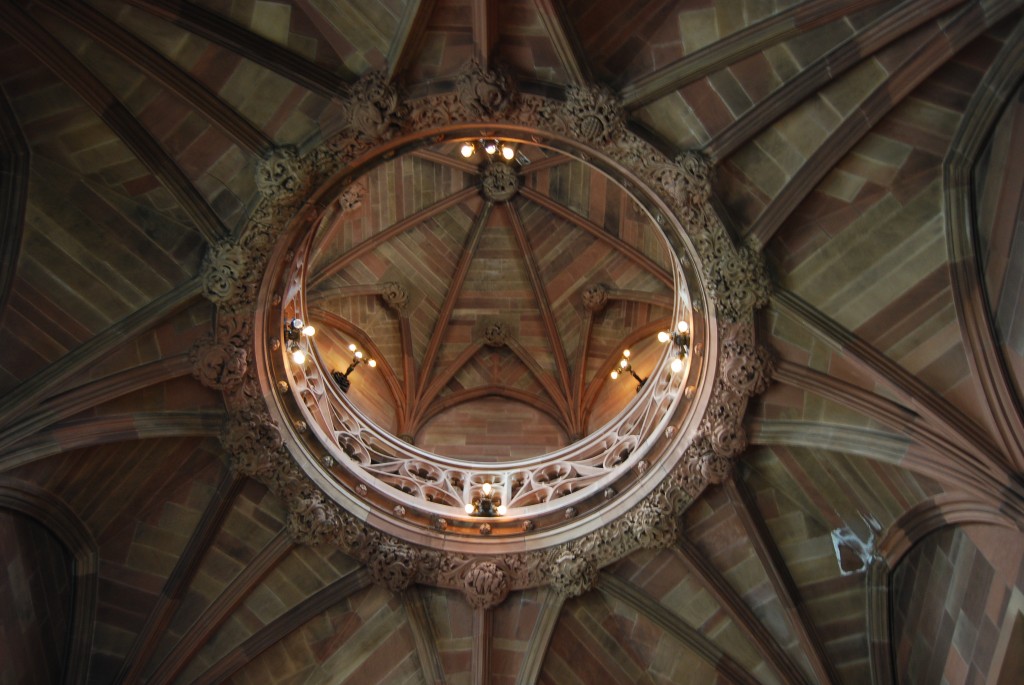 Leave the traffic and bustle of Manchester’s Deansgate, and step into the studious quiet of the John Rylands Library, and you’re transported to a different world – of peace, calm and more books and manuscripts to study and admire than you could absorb in a lifetime.

It’s no longer usual to enter through the street doors into the gloom of the original entrance lobby, which in some ways is a pity.  Instead you enter through a light, white modern wing that brings you to the original Gothic library by a gradual route.

This brown stone Gothic Revival temple of learning is a monument to one of Manchester’s greatest cotton merchants and philanthropists, John Rylands (1801-1888), conceived and paid for by his third wife and widow, the Cuban-born Enriqueta Augustina Rylands (1843-1908).

She had a very strong idea of what she wanted – a free public scholarly library in the heart of the city of Manchester, for which she purchased as core collections the Althorp Library of Lord Spencer and, later, the Bibliotheca Lindesiana from the Earl of Crawford.

Initially, she intended the library to specialise in theology, and specified a Gothic building that would suggest ecclesiastical and university architecture, so she engaged Basil Champneys (1842-1935) on the strength of his work at Mansfield College, Oxford (1887-90) [see http://en.wikipedia.org/wiki/Mansfield_College,_Oxford].

Enriqueta Rylands was so anxious to begin work on the Deansgate site that, though Champneys produced the initial design within a week of gaining the commission, she demanded to see building work begin before the detailed work had even started.

To satisfy her, he contrived a 4ft 6in concrete platform on which later rose his spatially complex, technological advanced repository of some of the most valuable books in Manchester – its interior insulated from the smoke and noise of the city by lobbies and ventilated by the best air-conditioning that was practical at the time.

The reading-room is on the first floor, to catch the limited available light, approached by a capacious, picturesque sequence of staircases, galleries and vaults that Nikolaus Pevsner described as “a cavalier throwing-away of whole large parts of the building to spatial extravagance pure and simple”.

The atmosphere of monastic calm, within yards of the busy city-centre street, is dramatic, and reflects the religious emphasis of the original book-collection, though Mrs Rylands insisted on toning down some ecclesiastical features such as the intended traceried screens to the reading-bays.

Despite the romanticism of its aesthetic appeal the building was designed to be fireproof, with a six-inch ferro-concrete lining to the masonry vaults, and was from the beginning lit by electricity, generated in the huge basement.

Since 1972 the building has been the John Rylands University Library of Manchester, though members of the public are free to join:  http://www.library.manchester.ac.uk/ourservices/howtousethespecialcollections.

It’s worth seeking out.

The 80-page, A4 handbook for the 2009 tour Manchester’s Heritage, with text, photographs, maps and a reading list, is available for purchase, price £15.00 including postage and packing.  To view sample pages click here.  Please send a cheque, payable to Mike Higginbottom, to 63 Vivian Road, Sheffield, S5 6WJ.

1 thought on “Shrine of books and manuscripts”