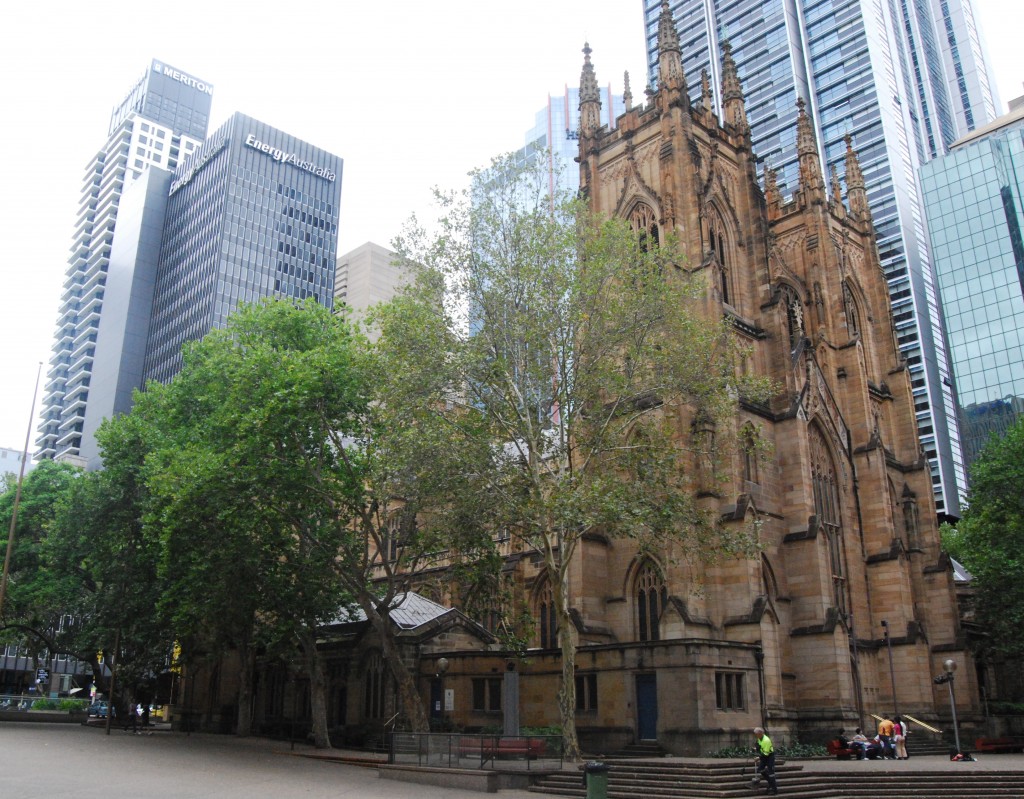 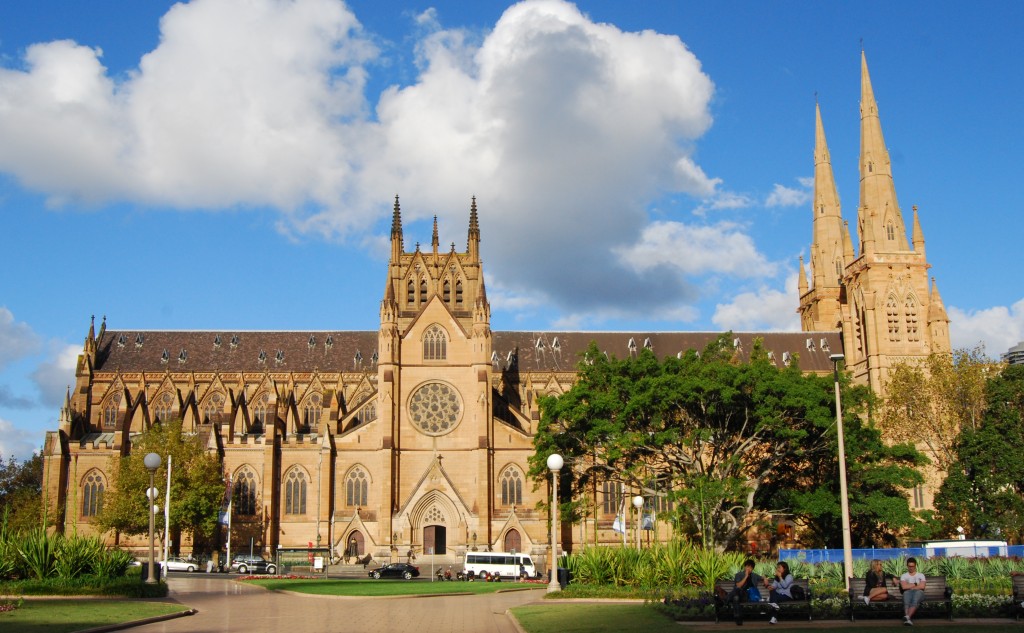 Catholic cathedrals in most Australian cities were deliberately designed to outshine their Anglican neighbours.

In Sydney, Australia’s earliest settlement founded in 1788, the Anglicans were quicker off the mark, and after a couple of false starts completed St Andrew’s Cathedral, which was consecrated in 1868.

The architect, Edmund Thomas Blacket (1817-1883) had a difficult time adapting the existing foundations and part-construction of an earlier project, and produced a modest-sized but imposing composition, with more than a passing resemblance to York Minster.

Sadly, St Andrew’s Cathedral has been compromised more than once.  Because of the noise of Sydney’s trams passing the east end of the cathedral, the entire church was reversed, placing the entrance on the east so that communion was celebrated as far as possible from the tramlines at the west end where the choir had to fight, not only the trams, but also the acoustics.

When in 1999-2000 the original layout was restored, liturgical considerations required that the old altar had to go.  It was, in addition, riddled with termites.

As a result, the fine reredos designed by John Loughborough Pearson and carved by Thomas Earp was left framing a vacancy.

The seat of the Catholic Archbishop of Sydney is the splendid St Mary’s Cathedral – also the successor to a couple of earlier structures which were successively destroyed by fire.

The foundation stone of St Mary’s was laid in 1868, the year St Andrew’s was consecrated.

The Catholics had the advantage, however, of a spacious site on the edge of the built-up city-centre, and they chose as their architect William Wilkinson Wardell (1823-1899), who already had St Patrick’s Cathedral, Melbourne, well under way.

Wardell lived long enough to see St Patrick’s substantially completed, but St Mary’s took much longer.  Work on the nave began in 1913 and was completed in 1928.

Even then, Wardell’s elegant design was truncated, because there were insufficient funds to complete the twin western towers with spires.

Indeed, it seemed unlikely that such expensive luxuries would ever be justified, until an A$5,000,000 grant from the New South Wales Government prompted the ingenious solution of flying in steel frames by helicopter and cladding them in Wondabyne sandstone to match Wardell’s original design and intentions.

St Mary’s Cathedral was topped out, in the literal sense, in August 2000, completing a project that began in 1868.

Mike Higginbottom’s lecture Gothic Down Under:  English architecture in the Antipodes explores the influence of British architects, and British-trained architects, on the design of churches and other buildings in the emerging communities of Australia and New Zealand.  For details, please click here.