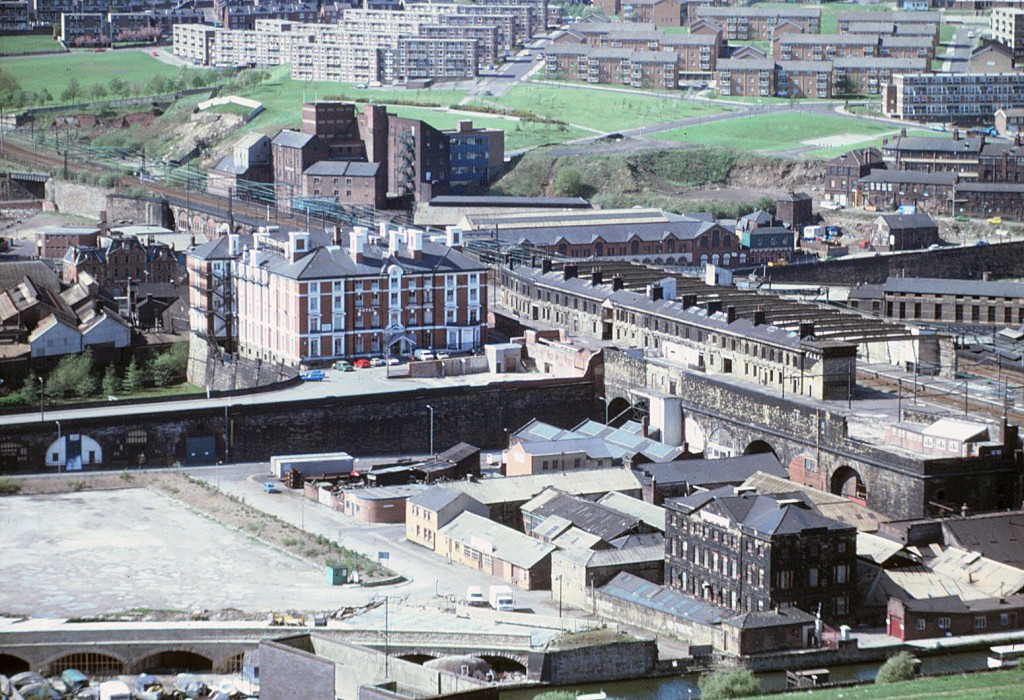 The Holiday Inn Royal Victoria Sheffield, is a splendid Victorian hotel, dating from 1862, but it stands in splendid isolation, high above the River Don, cut off from the city by the Inner Ring Road, and – as its website plaintively declares – half a mile from the railway station:  http://www.holidayinnsheffield.co.uk.

The rival Midland Railway had a station nearby, Sheffield Wicker, opened in 1838 on the site that’s now occupied by Tesco Extra, but that line took passengers north to Rotherham where they had to change to a London train.

Only after the Midland Railway opened their new station in 1870 did Sheffield have a choice of direct trains to London and (from 1876) to Scotland.

Victoria continued to provide the quickest service to Manchester and served the east-coast resorts that were popular among Sheffield folk – Cleethorpes, Mablethorpe and Skegness.

In 1954 the Manchester-Sheffield service was electrified, cutting the journey-time between the two cities to 56 minutes.

The 1960s Beeching rationalisation caused the transfer of almost all the passenger services from Victoria into the erstwhile Midland Station, and after some controversy the Sheffield-Manchester service was diverted to the Hope Valley route, which served more local communities and carried the cement traffic from Hope.

Until 1983, rail passengers between Huddersfield and Sheffield via Penistone had the weird experience of trundling through what remained of Sheffield Victoria and reversing to gain access to the former Sheffield Midland.

Eventually, that route was adjusted to run via Barnsley and Penistone, and all that now remains of Sheffield Victoria is a single track to carry trains to the steelworks at Stocksbridge.

There is a proposal to reinstate passenger services over the existing track to Stocksbridge:  http://donvalleyrailway.org.

Meanwhile, fast trains between Sheffield and Manchester via the Hope Valley complete their journeys in under an hour via Stockport.

The authoritative account of Sheffield Victoria Station is at http://www.disused-stations.org.uk/s/sheffield_victoria/index.shtml.