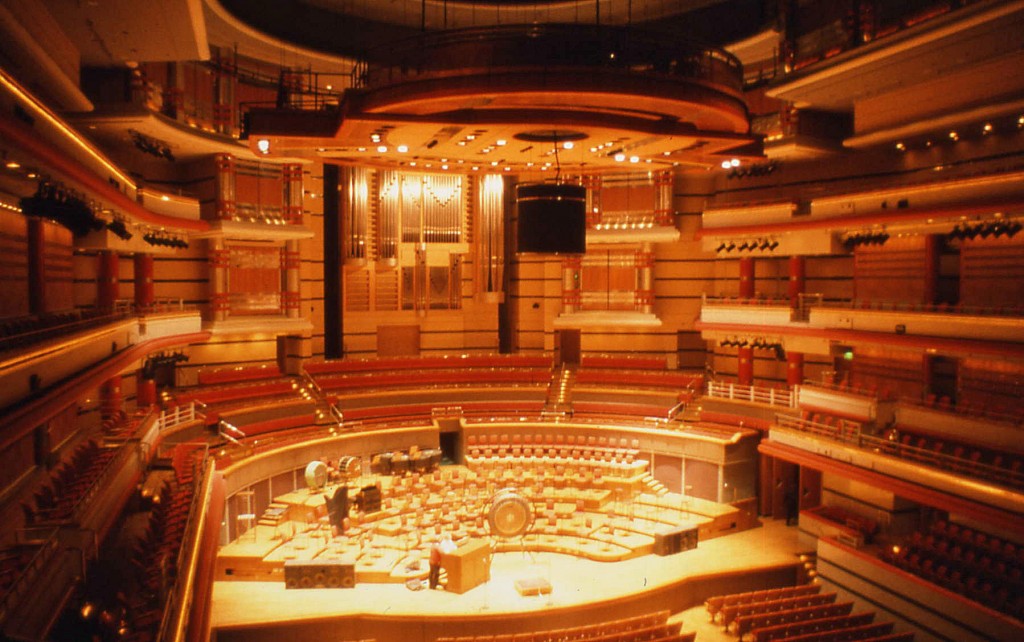 Birmingham’s Town Hall was the centre of its musical life from its opening in 1834 until 1991, and the home base for the City of Birmingham Symphony Orchestra from its inauguration in 1920.

When Sir Simon Rattle became Principal Conductor & Artistic Adviser in 1980, and Music Director from 1990, he made it his business not only to develop the orchestra further but to provide it with a better home.

He had told Russell Johnson, head of the acoustic consultants Artec of New York, that “If I am ever involved in a new concert hall, you will design it…”

Symphony Hall is primarily a concert hall which can be adapted for conference use, with 2,200 seats, 63m long, 31m wide and 22m high.  The seating is tiered, with 877 on the main floor, 347 on the first gallery-tier, 291 on the second and 485 on the third.  At the rear of the platform there is seating for a choir of up to two hundred.

The design combines traditional materials and sophisticated technology to provide flexible acoustics for every musical genre from chamber music to the most ambitious orchestral and choral works.  It has sliding acoustic control banners to reduce reverberance, an adjustable reverberation chamber above and behind the stage fitted with twenty concrete swing-doors each weighing approximately eight tons to vary the volume of the auditorium by up to 30% and a 42-tonne acoustic canopy.

Its reverse fan shape is based on traditional opera houses and concert halls, with the audience stacked in tiers in a narrow chamber.

Russell Johnson advocates using wood “…similar to that of a violin”.  The perimeter walls of the Hall are one foot thick, and much of the acoustic quality comes from this sheer weight of materials.

Ironically, this masterpiece of modern acoustic design stands only 35m from the busiest rail tunnel in Britain, running under Monument Lane to the southern approach to New Street Station.  In fact the Hall is located as far away as possible from the railway line.  (A proposal to create further space by moving the Crown public house across the canal was rejected.)  The railway tracks were relaid with rubber-lined sleepers, and the silence of the Hall is protected by noise-insulating piles and mountings designed by Ove Arup & Partners.

Like its predecessor, the Town Hall, it was incomplete when it was opened.  The front pipes and casework for the Klais organ were installed in time for the opening by HM Queen Elizabeth II on June 12th 1991;  the organ itself – the largest mechanical-action instrument in the United Kingdom – was inaugurated in 2001.

Now the two halls run in tandem, providing the city of Birmingham with an unrivalled diet of musical experiences.

Take a look at what’s on – the variety is astonishing:  https://www.thsh.co.uk.