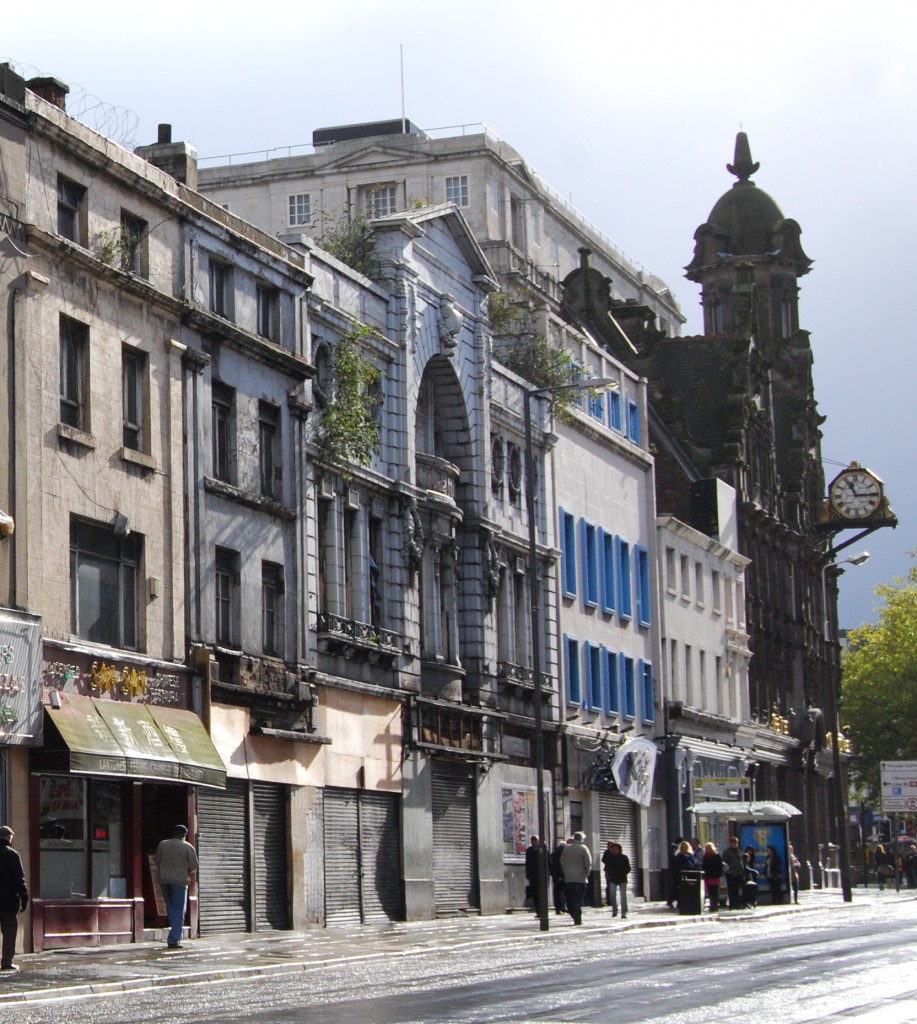 As Liverpool city-centre regenerates, the remaining patches of neglect stand out more clearly.

The east side of Lime Street has been neglected for years, and yet the stretch between the Crown and the Vines pubs includes a spectacular landmark building that still, somehow, remains in one piece.

The Futurist Cinema, originally the Lime Street Picture House, was the first purpose-built cinema in Liverpool, opened in 1912.  It was the first to show sound movies, in 1926, three years before The Jazz Singer at the Olympia, West Derby Road.  It converted to Cinemascope in 1954 without interrupting performances, and at the end of its long history it was the only place in Liverpool fitted with Sensurround for the film Earthquake (1975):  [http://www.in70mm.com/newsletter/2004/69/sensurround/about.htm].

It closed in July 1982 and has remained empty and untended ever since.  Kim Ryan’s film of the Merseyside film-maker Alex Cox revisiting the Futurist shows the interior in 2008:   http://www.youtube.com/watch?v=Y2_JRTwP4J0.  An April 2013 news article raises the question of whether the building is beyond saving:  http://www.clickliverpool.com/business/business-news/1218614-back-to-the-future-futurist-building-set-for-revamp.html.

The campaign to save at least the façade of the Futurist is at http://thefuturistcinema.wordpress.com.

A more recent Victorian Society alert to threats to the Lime Street streetscape is at http://www.victoriansociety.org.uk/news/damaging-lime-street-plans-could-further-endanger-liverpools-world-heritage.  This is supplemented by the SAVE Britain’s Heritage objection to demolition:  http://us8.campaign-archive2.com/?u=9ea03bb11e3ccc82634488e2b&id=63d3031744&e=68a86e2740.

Update:  After a protracted legal process, the campaign to save the Futurist failed, and demolition followed almost immediately:  http://www.liverpoolecho.co.uk/news/liverpool-news/demolition-historic-futurist-cinema-begins-11697085.