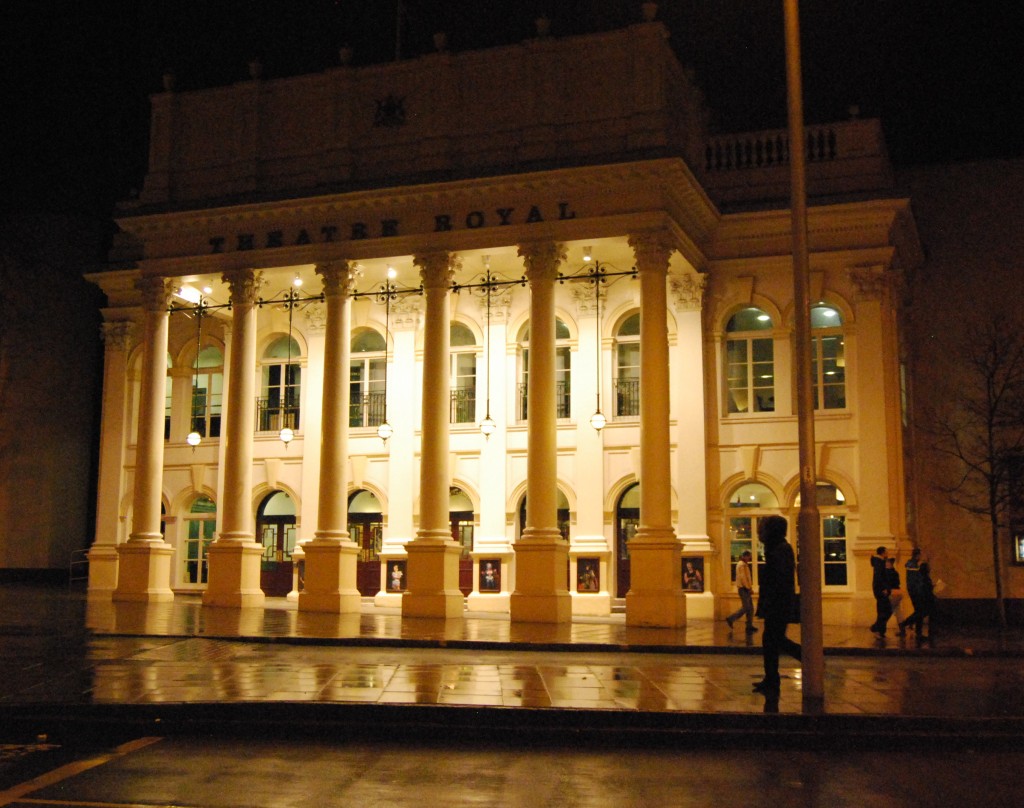 The classical portico of Nottingham’s Theatre Royal has dominated the streetscape since it was built in 1865:  http://www.theatrestrust.org.uk/resources/theatres/show/514-theatre-royal-nottingham.

Originally designed by the prolific and prestigious Victorian theatre-architect Charles John Phipps (1835-1897), it was modernised in 1896-7 by the more famous Frank Matcham (1854-1920), who at the same time built the new Empire Palace Theatre for what shortly after became Moss Empires partly on what had been the site of the Theatre Royal dressing-rooms.

There are stories of artistes straying into the wrong backstage-area, particularly after Moss Empires took over the Theatre Royal in 1924.

The Empire was also the site of Ken Dodd’s stage debut, as Professor Yaffle Chucklebutty, “Operatic Tenor and Sausage Knotter”, in 1954.

The Empire closed in 1958 and was demolished eleven years later for road-widening.  At a time when Nottingham City Council were planning and building the ultra-modern Playhouse as a repertory theatre, there was talk of demolishing the Theatre Royal also and building a replacement touring house elsewhere.

In fact, the Theatre Royal lingered on, becoming so decrepit that eventually the D’Oyly Carte company refused to appear because of the state of the backstage areas.

In 1977 the City Council purchased the County Hotel, on the opposite side of the Theatre Royal building to the former Empire, and commissioned Renton Howard Wood Levin to restore Matcham’s design, except for the proscenium arch and adjacent boxes, within Phipps’ auditorium envelope.

Subsequently, in 1980, Renton Howard Wood Levin built from scratch the magnificent Royal Concert Hall behind the Theatre Royal.  The two auditoria work in tandem [http://www.trch.co.uk], with the Playhouse operating at the other side of the city centre:  http://www.nottinghamplayhouse.co.uk/whats-on.

Nottingham has a proud claim to have been at the forefront of the late twentieth-century revival of live performances in provincial towns and cities.