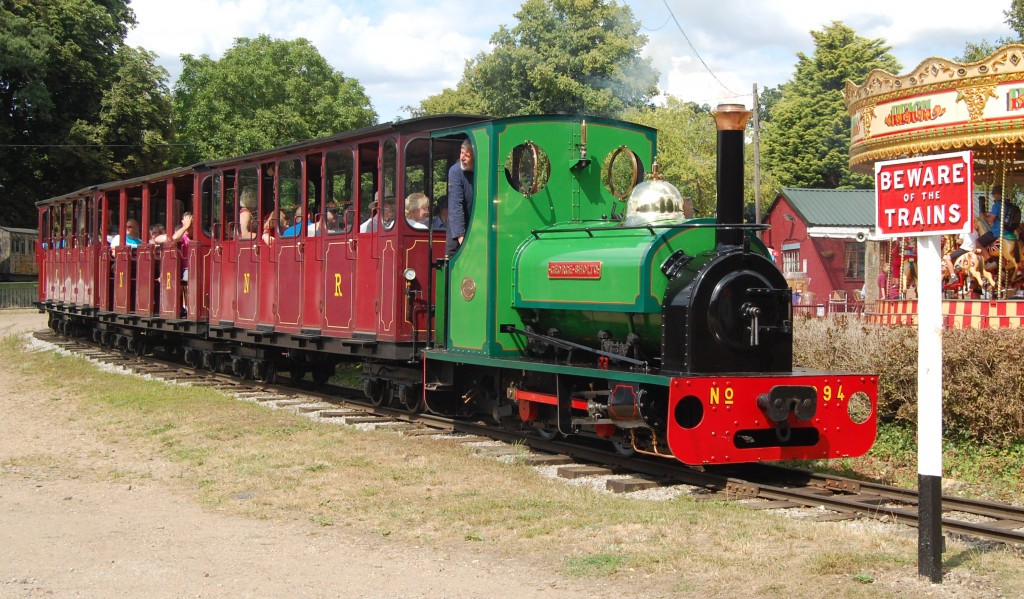 If you’re going to have a train set you might as well have a big one. And if you can afford it, why not have three?

Alan Bloom MBE (1906-2005) was a significant figure in the world of horticulture, the son of a market gardener, an innovator who developed new plants and new ways of planting after he bought the 228-acre Bressingham Hall estate in Norfolk in 1946.

By the 1960s his nursery business and associated display garden were sufficiently successful for him to indulge his other love – live steam. He initially bought a traction engine to assist garden construction:  he ended up with fourteen.

Unlike his distant neighbour and near contemporary George Cushing (1904-2003), who concentrated on collecting road engines and showmen’s equipment at Thursford, Alan Bloom had a particular liking for rail-borne steam.

He subsequently built a miniature railway around the periphery of the garden. Then, in the late 1960s he installed a fine set of gallopers and began to collect standard-gauge steam locomotives.

The standard-gauge collection includes some significant items loaned from the National Collection including Great Northern Railway 990 Henry Oakley, London, Tilbury & Southend Railway 80 Thundersley and a London, Brighton & South Coast Railway “Terrier” tank, Martello, in its guise as British Railways 32662 – all of them static.

The museum also owns the last surviving standard-gauge Garratt locomotive in Britain and a vast German post-war Class 52 Kriegslokomotiven (“war-locomotive”), found mothballed in a Norwegian railway tunnel, with a cab the size of a small bedsit.

Like George Cushing, Alan Bloom safeguarded his legacy by establishing a charitable trust, with few employees and many volunteers, but Bressingham has none of the pizazz of the Thursford Collection, with its Wurlitzer, its dancing penguins and roller-skating milkmaids.

Bressingham downplays its commercialism. It’s a relaxed affair of trains and gardens, a honeypot for families where you can wander at will. It’s an admirable place for a picnic.

And it’s a memorial to a man whose legacy is to give pleasure to people: http://www.bressingham.co.uk/home.