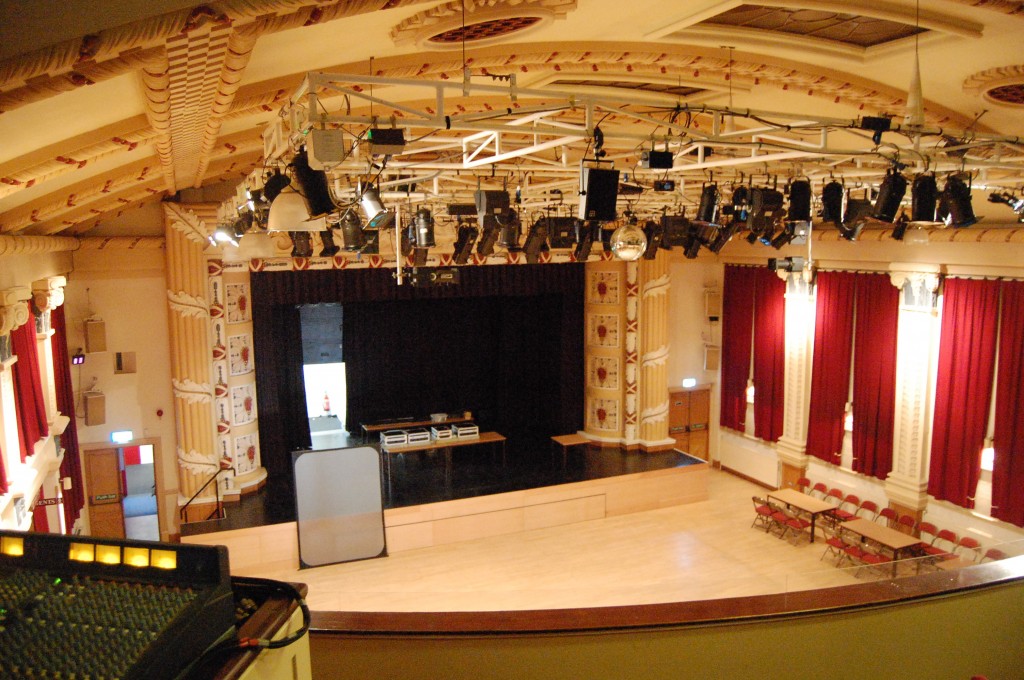 Across the road from the Pomegranate Theatre, Chesterfield Borough Council maintains another auditorium, the Winding Wheel, based on the former Picture House, to provide an even wider range of events – everything from classical music to beer festivals, Russell Watson to Ken Dodd – alongside the film and drama of the long-established civic theatre.

The Chesterfield Picture House, designed by the Sheffield architect Harold J Shepherd, opened on September 10th 1923. Its façade, which incorporates shops on each side of the entrance, is in the mock-Tudor style that the Borough Surveyor, Major Vincent Smith, encouraged in the town centre.

The auditorium is in a faintly grotesque Renaissance manner, with a rather more refined T-shaped restaurant looking out over the street. The foyer and the restaurant still retain elegant fireplaces, that must have provided a welcome as well as welcome heat in a town that gained its livelihood from coal.

There was originally an organ, for which Reginald Dixon, then in his late teens, was employed as deputy organist at £5 a week, a significant advance on his first £3-a-week engagement at the Stocksbridge Picture Palace north of his native Sheffield.

The Picture House did well enough for the owners to invite Harold Shepherd back in 1930 to build a ballroom on an adjacent plot, and in 1936 they sold out to Oscar Deutsch, who rebranded it as an Odeon the following year.

Films lasted until 1981, and a nightclub, Jingles, carried on in the ballroom and café areas until 1987 when the Borough Council bought it and converted it to a multipurpose entertainment venue.

In the cinema auditorium the renovations involved stripping out the stalls seating, installing a flat floor which hides the bottom part of the proscenium, and installing a flexible lighting and sound rig suspended from the barrel ceiling.

The Winding Wheel Exhibition, Entertainment and Conference Centre opened in 1987 and was listed Grade II in 2000. Its capacities are now 600 seated theatre-style in the stalls, with 300 in the fixed balcony seating, or 1,000 standing in the stalls area.

For a town with a population of around 90,000, Chesterfield is fortunate in the quality of its auditoria and the range of entertainment that the Winding Wheel and the Pomegranate Theatre between them provide.

What’s on at the Winding Wheel is online at http://www.windingwheel.co.uk/whats-on/winding-wheel.aspx.