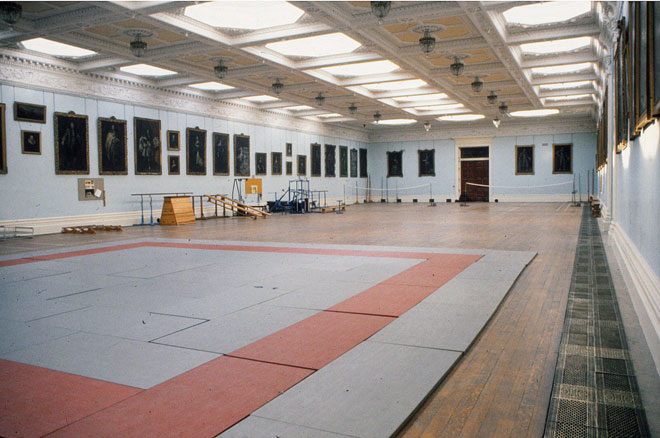 The eccentricities of the “burrowing” fifth Duke of Portland seem endless, and by no means all of the stories are true.  He was distinctive among his contemporaries for providing the very latest conveniences for his guests, even though he rarely entertained, and notoriously kept out of his guests’ way.  One of his most grandiose improvements to Welbeck Abbey was the vast ballroom 154 feet by 64 feet, entirely sunk below ground and top-lit by bull’s-eye domes, well-lit, centrally heated and not at all damp.  On arrival for a ball at Welbeck, guests were conveyed down to the ballroom, still in their carriages, by hydraulic lift to a gently-graded inclined tunnel leading them to the dance-floor.  However, the fifth Duke never gave a ball, and the gas-lit splendour only came into its own when the sixth Duke, a distant cousin who never met his predecessor, inherited in 1870.

The most recent, authoritative and succinct account of the fifth Duke’s life and works is Derek Adlam, Tunnel Vision:  the enigmatic 5th Duke of Portland (Harley Gallery 2013), which contains the full text of Elizabeth Butler’s Account of her life as a laundry maid at Welbeck, 1869-1879 (1931).

Nina Slingsby-Smith’s memoir of her father, George: Memoirs of a Gentleman’s Gentleman (Cape 1984 – out of print but available second-hand on Amazon), wonderfully captures the atmosphere of life above and below stairs at Welbeck in the sixth Duke’s time.  It includes a memorable story of an incident at dinner, when a luckless footman’s humanitarian dilemma nearly lost him his job, until King Edward VII saw the funny side:  the tale is far too good to spoil – seek it out on page 70 onwards.

Guided tours of the State Rooms (but not the underground rooms) are bookable in advance:  http://www.welbeck.co.uk/experience/visit/welbeck-abbey-state-room-tours.

Welbeck Abbey is one of the houses featured in Mike Higginbottom’s lecture English Country Houses – not quite what they seem.  For further details, please click here.