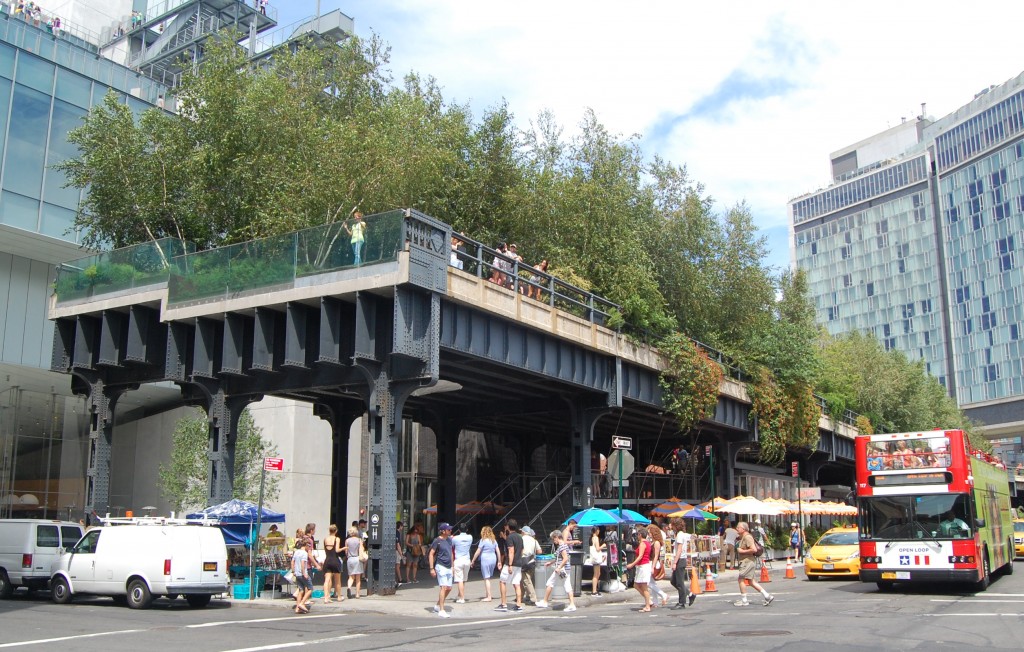 One of the most relaxing ways of wandering in a green setting in Lower Manhattan is the High Line, an elevated walkway created from a redundant railway viaduct running the length of the Meatpacking District and almost into Greenwich Village.

When the first railways were laid into Manhattan, the built-up area of the street grid extended hardly as far as 23rd Street.  The Hudson River Railroad, built 1846-51, brought its tracks across the Harlem River at the Spuyten Dyvel Bridge and all the way down Tenth Avenue at grade level, with obvious dangers and inconveniences to street traffic.

In 1871, most passenger services were diverted by the Spuyten Duyvil & Port Morris Railroad, originally built in 1842, along Park Avenue to what became the Grand Central Terminal.

Because the Hudson River Railroad west-side line remained useful for bringing freight into lower Manhattan, it was grade-separated between 1929 and 1934 as part of the West Side Improvement Project.  The resulting elevated railway was aligned along the blocks on either side of 10th Avenue, sometimes running through buildings such as the Bell Telephone Laboratories Building at 463 West Street and the Nabisco building between 15th and 16th Streets, now Chelsea Market.

The line became redundant from the 1960s, and the last train, apparently delivering a load of frozen turkeys, ran in 1980.

The track-bed became derelict and overgrown, though the steelwork remained entirely sound, and in the 1990s local residents began to campaign for its retention as an unlikely amenity:  https://www.youtube.com/watch?v=F1tVsezifw4.

Supported by such luminaries as the fashion designer Diane von Fürstenberg, and sponsored by a range of high-end companies, the viaduct was reopened as the High Line [http://www.thehighline.org/visit], a greenway modelled on the Parisian Promenade plantée (1993), in phases between 2009 and 2014.

It runs from 34th Street to Gansevoort Street, south of Little West 12th Street and adjacent to the new Whitney Museum of American Art (Renzo Piano 2015), encompassing wild planting, wooded groves and a lawn, with a range of amenities such as seating, artworks and catering facilities.  There is level access at 34th Street, and elsewhere there are five wheelchair-accessible entrances with elevators and a further five staircases at intervals.