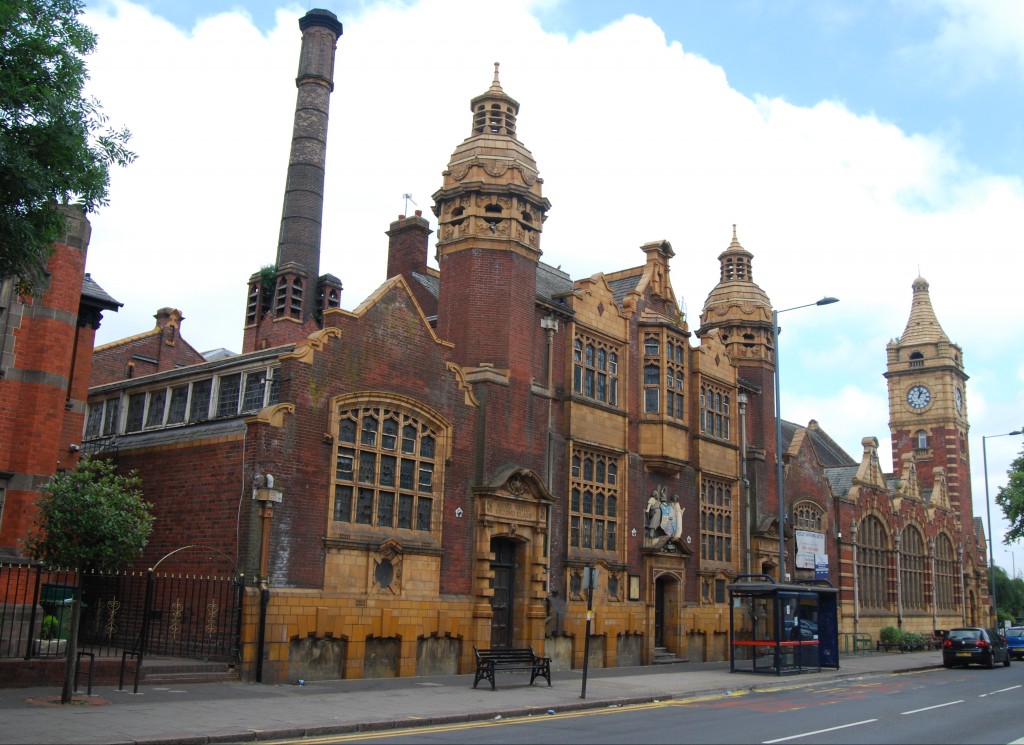 The promise of baths and a library was part of the agreement by which Balsall Heath, formerly part of Warwickshire, was brought within the city of Birmingham.

The Moseley Road Library with its clock tower was designed by Jethro Anstice Cossins & Barry Peacock, with an elaborate terracotta municipal coat of arms by Benjamin Creswick, and opened in 1895.  This is the same team who had built the Bloomsbury Library, Nechells in 1892.

The baths by William Hale & Son opened in October 1907.  The facilities included a galleried first-class and second-class swimming bath (both for men only), first- and second-class private baths for men and women, a small laundry, a clubroom and the public library.

In recent years problems with the building and with budgetary cutbacks have repeatedly threatened the complex since its Grade II listing was upgraded to II* in 2004.

It is one of only three Grade II* listed swimming baths in the country.  Its irreplaceable features include the only remaining complete set of forty-six pre-war slipper baths in Great Britain, still with the original oak ticket office and attendants’ kiosks largely intact, the money-taker’s flat, a vast cold-water tank and, in the first-floor laundry, what may be the only surviving steam-heated drying racks in a British swimming baths:  http://www.poolofmemories.co.uk/explore-the-building.

The photographer Mike Jones’ images of the baths are at http://www.dailymail.co.uk/news/article-2942386/Haunting-images-Edwardian-swimming-baths-built-1907-lying-abandoned.html.

Update:  At last, it seems the future of the baths has turned a corner:  https://www.nationaltrust.org.uk/features/the-next-steps-for-moseley-road-baths.