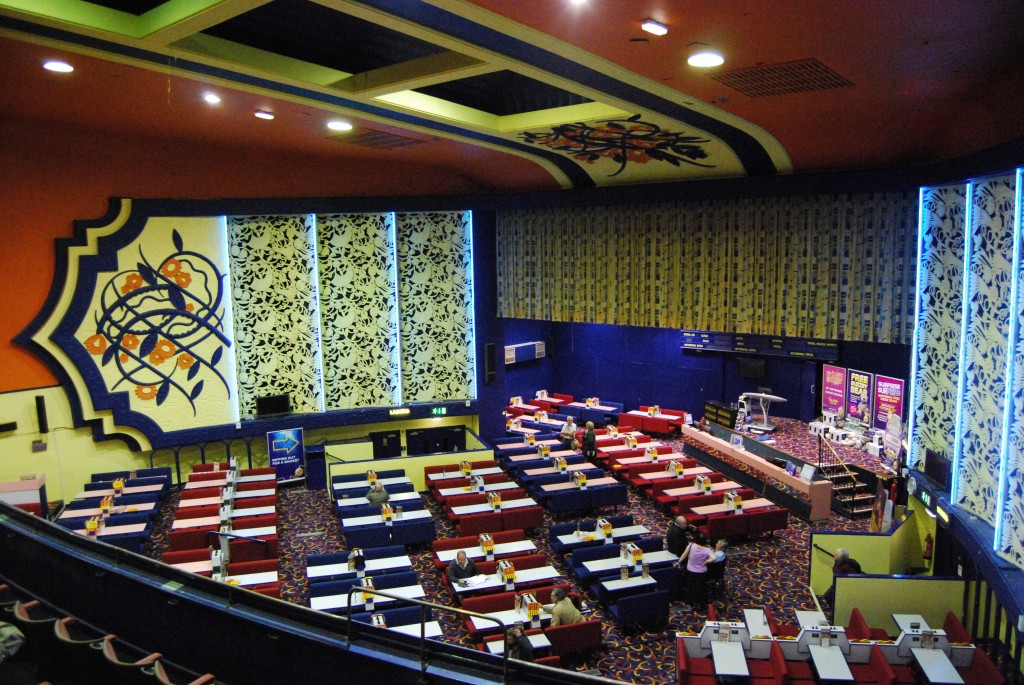 The Cinema Theatre Association is understandably unhappy that Historic England has dismissed the proposal to list the Regal Cinema, Bridlington, for its fine and almost intact Art Deco interior:  http://cinema-theatre.org.uk/our-campaigns/cinemas-at-risk/regal-bridlington-1.  Bingo has kept the place going since films ended in 1971.

Opened on July 28th 1938, the building was designed by Charles Edmund Wilford (1895-1988).  Though the exteriors were different, the interior of the Bridlington Regal was identical to the demolished Regal Cinema, Walton-on-Thames, built at the same date by the same architect for the same owner, Lou Morris.

The façade is dominated by a long, horizontal window which lighted the first-floor café, above four shop units on the ground floor.

The café and the auditorium, which originally seated 1,500 (or 1,489, or 1,355, depending on the source), are distinguished by the ornate Art Deco plasterwork of Eugene Mollo and Michael Egan.

The splay walls on either side of the proscenium figure a filigree pattern of foliage, originally illuminated by concealed lighting, and the geometric shapes at the end of the splays and on the ceiling are decorated with stylised foliage.  The original decorative scheme in silver and gilt was more subtle than the present livelier palette of the bingo club.

The stage is 43 feet wide and deep, with a suite of four dressing rooms, and there was a 3-manual, 6-rank Compton organ which was removed c1968.

The CTA’s Bulletin (January/February 2015) bristles with indignation over the “unclear and unreliable… subjective standard used to adjudge this building” and the “factual errors” in the Historic England rejection of the listing proposal.

Bridlington Borough Council has made a magnificent job of the Spa complex down the road from the Regal.  Let’s hope that imagination, diplomacy and judicious financial management will keep the Regal intact if and when bingo becomes unprofitable.

There is footage of Florence de Jong playing the Regal Compton organ at https://www.youtube.com/watch?v=O3Dg3LNYGyw.