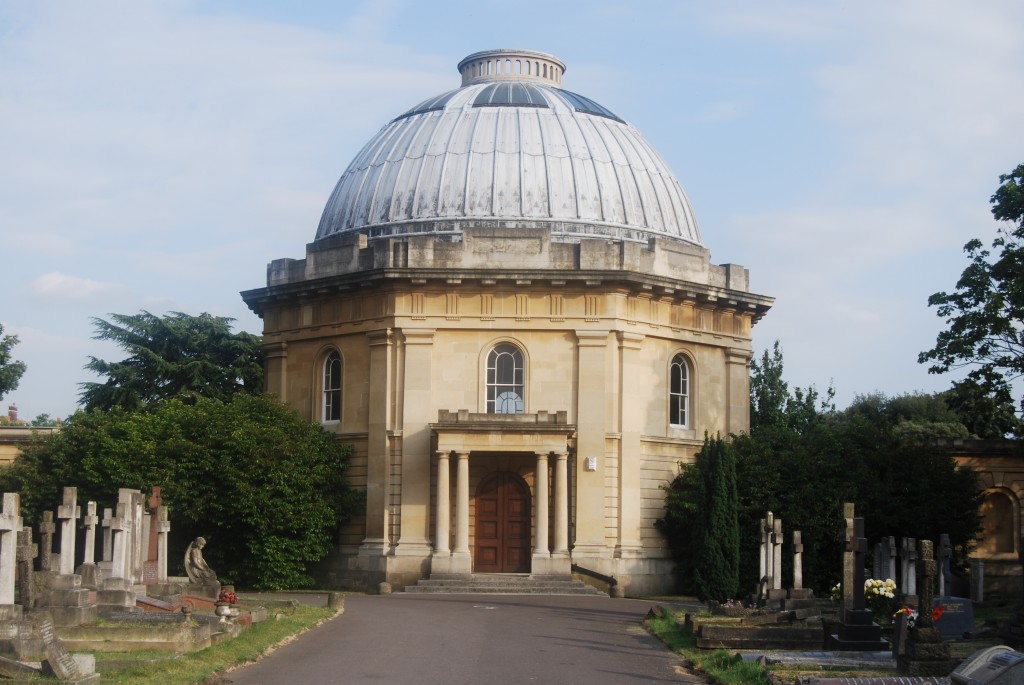 Victorian governments hated nationalisation.  The upper-class Lords and Commons, Liberals and Conservatives alike, believed in their different ways in what we’d now call “small government”.  Every possible public service in the emerging urban society – roads, railways, utilities – was operated by private joint-stock companies authorised at arm’s length by Parliament.  Almost all operations that were government-controlled were directed in the name of the Crown – the armed services, police, the Royal Mail and even the Ordnance Survey.  Perhaps this is what Margaret Thatcher meant when she referred to “Victorian values”.

Brompton Cemetery [http://www.brompton-cemetery.org] in West London is an unusual and unequivocal example of Victorian nationalisation.

It was constructed in 1836-40 – in the same decade as Kensal Green, Highgate and Nunhead Cemeteries – on a flat site between the Fulham and Brompton Roads, to a design by Benjamin Baud that suggested an open-air cathedral with a magnificent central avenue leading to the chapel, based on St Peter’s Basilica in Rome, at the east end.  The approach to the chapel is embraced by twin colonnades, suggesting Bernini’s great piazza.

Baud’s scheme proved over-ambitious, and the cemetery company’s shareholders became increasingly restless, so that when the Metropolitan Interments Act of 1850 closed the insanitary London churchyards and provided for government purchase of company cemeteries, they jumped at the chance to offload the liability of the cemetery’s shaky finances.

Ironically, a further Metropolitan Burials Act of 1852 effectively reversed government policy by obliging local authorities to set up municipal cemeteries, but by that time the negotiations over Brompton had passed the point of no return, and so the place has remained the only government-owned cemetery in the UK.  As such it is part of the Crown Estate, and is administered by the Royal Parks.