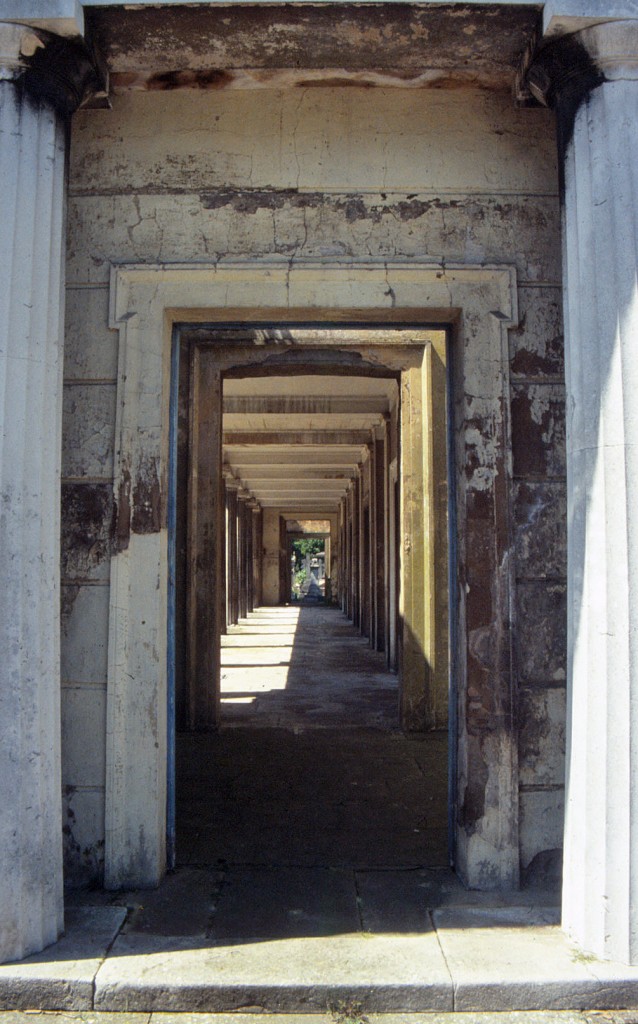 The Cemeteries & Sanitation:  the Victorian pursuit of cleanliness (June 18th-24th 2015) tour provides three opportunities – Brompton Cemetery, Highgate Cemetery and West Norwood Cemetery – to see Victorian catacombs.  Here, in lead-lined coffins, the Victorian dead lie awaiting the Second Coming.  A third site, Kensal Green Cemetery, also has a fine set of catacombs, though these are currently being restored.  Indeed, it is still possible to be buried in the catacombs at Kensal Green:  according to the Friends’ website [http://www.kensalgreen.co.uk], “both private loculi and shelves or vaults for family groups” are still available.

A catafalque is the raised base on which a coffin rests before and during a funeral service.  In the Anglican Chapel at Kensal Green, the catafalque acts as a lift, lowering coffins into the catacombs below.  The original mechanism, installed in or soon after 1837, was based on the cider press, and proved difficult to operate with decorum:  the two sides had to be screwed at exactly the same speed or the catafalque tilted and jammed.

The engineering company of Bramah & Robinson provided an improved coffin-lift design for West Norwood Cemetery in 1839, using smooth and silent hydraulic power to give the deceased a dignified exit through the floor.  The proprietors of Kensal Green Cemetery were so impressed that they replaced their original lift with a Bramah & Robinson hydraulic lift in 1844 for £200, half the cost of the original.

Highgate Cemetery [http://www.highgate-cemetery.org] also used a hydraulic lift to lower coffins from the south chapel to a tunnel into the East Cemetery to save the cortège crossing the public road, Swains Lane.

The West Norwood coffin lift is unusable, but is beautifully illustrated at
http://www.subbrit.org.uk/sb-sites/sites/w/west_norwood_cemetery/index.shtml.  The Kensal Green lift was restored to working order by the Friends of Kensal Green Cemetery in 1997:  http://www.kensalgreencemetery.com/cemetery/index4.html.