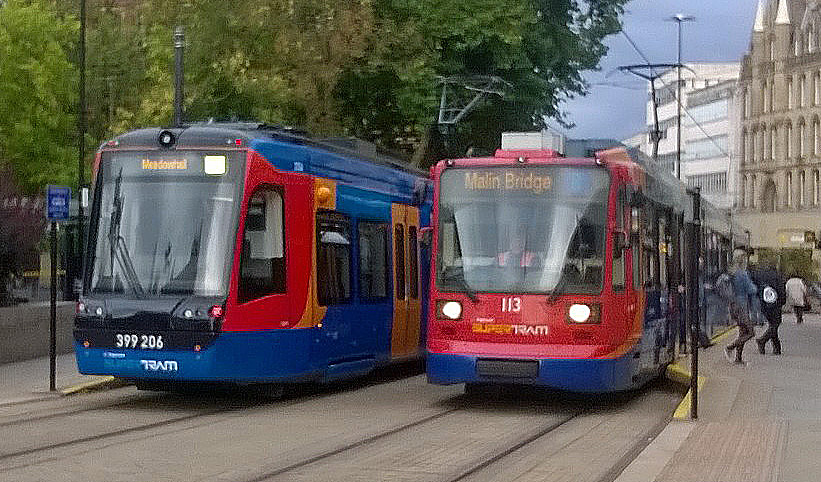 The announcement that the new Tram-Train service between Sheffield Cathedral and Rotherham Parkgate would begin service on Thursday October 25th 2019 was not before time.

It was initially planned to open in 2015, and the seven new Tram-Train vehicles have been running on the main Stagecoach Supertram network since September 2017.

Even before the new service started up, the South Yorkshire Passenger Transport Executive (SYPTE) initiated a consultation exercise to determine the future of the system from 2024, when the Stagecoach franchise expires:  https://www.travelsouthyorkshire.com/futuretram.

It seems that no provision has been made to finance the replacement of the original fleet, which is nearing the end of its useful life.

The consultation includes the suggestion of scrapping the whole system, which understandably has few political friends outside Sheffield:  https://www.doncasterfreepress.co.uk/news/mayor-ros-jones-no-more-cash-from-doncaster-taxpayers-for-supertram-1-9344722.

This has, predictably, greatly exercised the tram-enthusiast community –  [http://www.britishtramsonline.co.uk/news/?p=24061] – and provoked South Yorkshire taxpayers (such as me) to query whether their community charge and taxes are being wisely spent.

I wonder if this option among a range of others is actually political shroud-waving.

It’s not simply a matter of scrapping the vehicles and covering the tracks with tarmac, as happened to Sheffield’s first tram-system in the 1950s.  Not only has most of the track been relaid over the past few years, but dismantling Supertram would involve demolishing viaducts and reconfiguring road junctions and traffic signals across an eighteen-mile network.

It would also fly in the face of applying the results of the Tram-Train pilot scheme to other parts of South Yorkshire as well as the rest of the UK.

As a Sheffield resident I’ve often wondered why the South Yorkshire Supertram system has not developed, apart from Tram-Train, since it opened a quarter of a century ago.

In that time the Manchester tram-system has extended from two former rail routes with a street link into Piccadilly Station to seven routes (with an eighth, to Trafford Park, under construction) and the original 26 trams have been replaced by a fleet of 120 trams with 27 more on order.

In Nottingham, an initial service to the north of the city has grown to an X-shaped system running 37 trams over twenty miles of track, and the Birmingham tram-line to Wolverhampton, which initially stopped short of the city-centre, is now extending across the city with the intention of reaching Edgbaston by 2021.

In Edinburgh, where the tribulations of construction caused uproar, the tram service is hugely popular and likely to be extended in the next few years.

Why is there talk – even hypothetically – of shutting down Supertram when other cities are reaping the benefits of light rail?