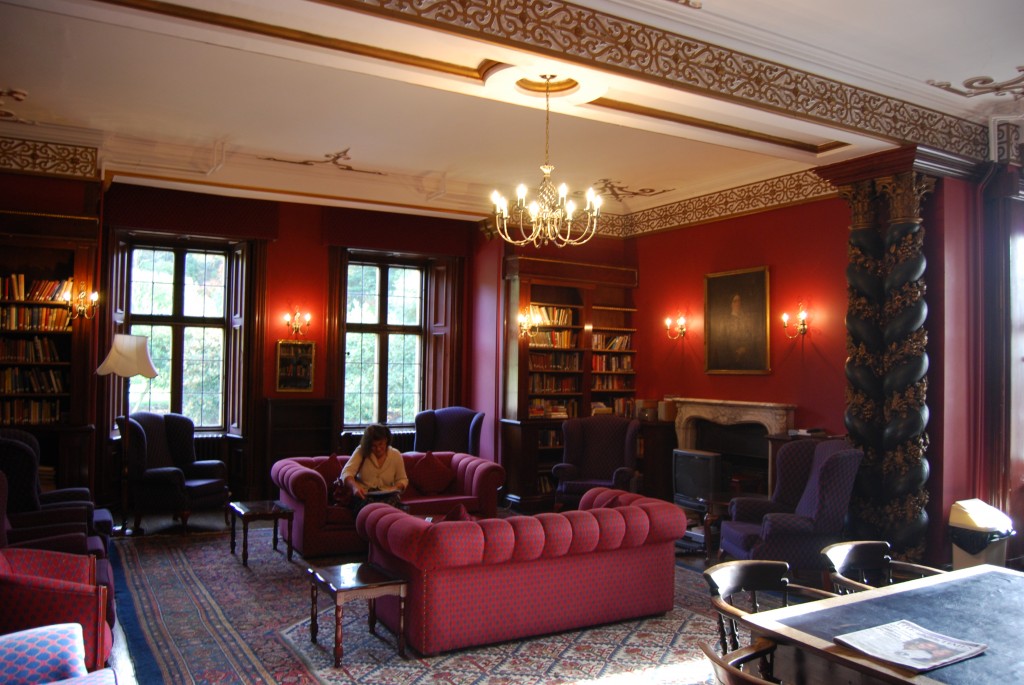 The interwar rescuer of Gregory Gregory’s vast Harlaxton Manor was as formidable and eccentric as the building – the English daughter of a coal porter and a washerwoman who invented Shavex, the first brushless shaving cream, Mrs Violet Van der Elst (1882-1966), the widow of a Belgian artist.

A succession of Gregory’s descendants had inherited this unforgiving pile and, with varying degrees of success, tried to live in it.  When Thomas Sherwin Pearson Gregory died in 1935 his son put it on the market with 500 acres “or as required”:  80 bedrooms are mentioned, though there was only one bathroom.  Jackson Stops & Staff’s plaintive advertisement in The Times – “To save from demolition…noble ancestral seat…probably the supreme example of domestic architecture of its period” – ignored the possibility that Salvin and Burn’s architecture was so substantial that demolition would be uneconomic.

Mrs Van der Elst paid £78,000 for the building and its surrounding land, renamed it “Grantham Castle”, vigorously modernised the plumbing and installed electricity on a suitably grand scale, and was invariably to be found at the great country-house sales of the time – Clumber, Rufford and so on – picking up furnishings, fixtures and fittings at bargain prices.  She made the estate an animal sanctuary, extending her protection even to the domestic mice in the Manor.

A glimpse of the house in Mrs Van der Elst’s day exists as a 1939 Pathé newsreel clip:  http://www.britishpathe.com/video/grantham-castle.

She was famed for her vehement campaigns against capital punishment, regularly turning up in her Rolls Royce outside prisons at the time of an execution.  She also made a practice of holding séances to contact her dead husband, and kept his ashes in an urn in the library, a dark, low room dominated by antique barley-sugar wooden columns.

Having shared the building with the RAF First Airborne Division during the Second World War, Mrs Van der Elst ran out of money and sold the house in 1948 for only £60,000.  When the house contents were auctioned Mr Van der Elst’s ashes were accidentally knocked down to an unsuspecting bidder and had to be discreetly retrieved.