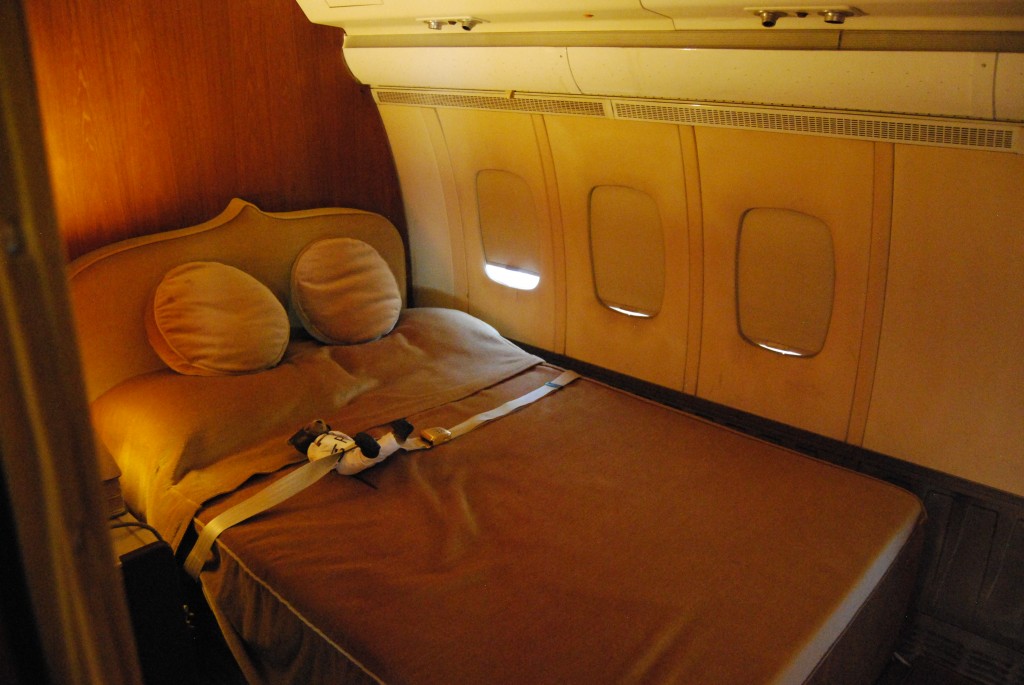 The Vickers VC10 aircraft had a distinguished career in both civil and military aviation.  Built at Vickers-Armstrong’s Brooklands plant from 1962 onwards, they were popular planes, designed to cope with short runways and “hot and high” airfields.  Fifty-four VC10s were built, of which nine survive in retirement.

Of these, A4O-AB is undoubtedly the most luxurious.  Originally sold to Freddie Laker’s British United Airways and registered G-ASIX in 1964, it found its way into the royal flight of the Sultan of Oman in 1974.  The Sultan, Qaboos bin Said Al Said (born 1940), understandably values his comfort, and his aircraft was adapted accordingly to provide  a lounge dominated by two large swivel chairs alongside a comfortable couch and walnut tables, two bedrooms, a commodious galley and a section seating 32 staff in an approximation to orthodox business class configuration.

During its thirteen years in the Omani Royal Flight A4O-AB inevitably gained its share of legends – flights to London purely to pick up fresh strawberries, and journeys to India in which the Sultan’s hawks travelled in the main cabin to the detriment of the carpets and upholstery.

When A4O-AB was replaced in 1987, the Sultan offered it to the Brooklands Museum as a memento of the aircraft that were built there.

This presented a practical problem, in that each of the fifty-four VC-10s had flown out of Brooklands when new, but very few had ever returned.  Though these planes customarily landed at 10,000-feet runways, at the disused but practical Brooklands airfield only 3,500 feet were available.  Return visits for maintenance had been directed to the nearby runway at Wisley.

The numerous precautions for this one-off landing were interesting, if slightly unnerving.  Following the pilot’s premise “if there’s any doubt, there’s no doubt”, the crew inspected the approach on the ground and by helicopter.  Various trees and lamp-posts were removed, police and fire-services were alerted, trains on the nearby London-Bournemouth line were paused and residents were warned to expect more noise than usual.

The pilot of that final flight, Captain Richard King, gives an account of his encounters with G-ASIX/A4O-AB, including the final flight, at http://www.vc10.net/Memories/A4OAB_Royalflight.html.

Visitors to the Brooklands Museum [http://www.brooklandsmuseum.com/index.php?/explore/vickers-1103-vc10-ex-g-asix-a4o-ab-1964] can board A4O-AB to admire the facilities, including the bathroom, and – by invitation – sit in the cockpit. 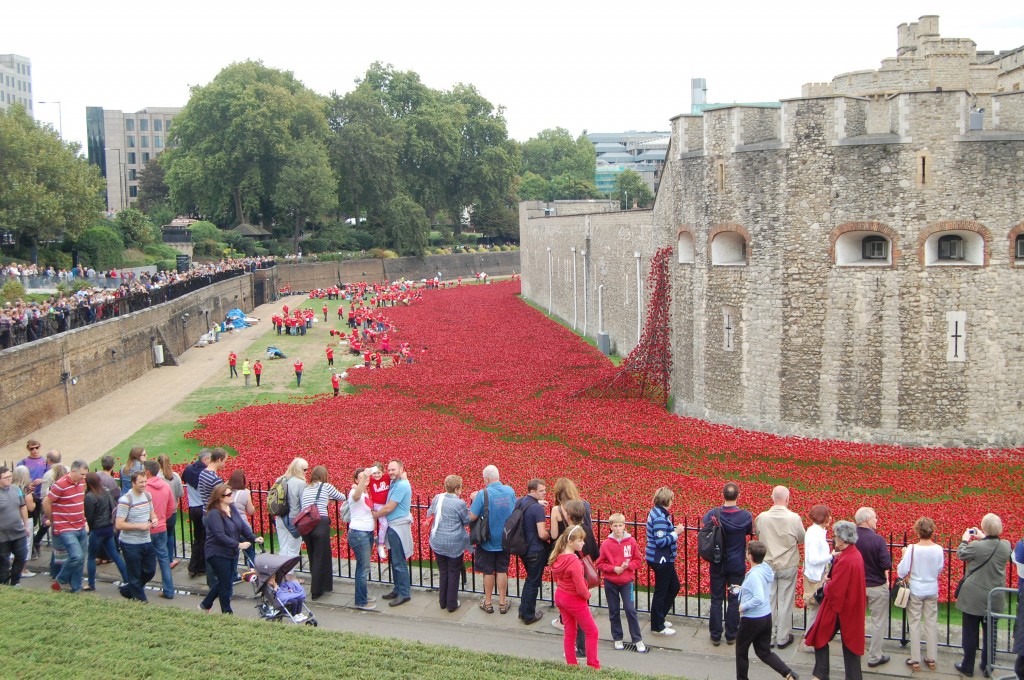 I like art to be accessible.  I like there to be a layer that is understandable without having to read an essay-length label, with as many deeper layers as may be for the onlooker to discover gradually.

There can be no more accessible art installation than Paul Cummins’ Blood Swept Lands and Seas of Red, 888,246 ceramic poppies currently being installed, in a setting by stage designer Tom Piper, in the moat of the Tower of London:  http://poppies.hrp.org.uk/about-the-installation.

Each poppy represents a British serviceman killed in the Great War.  The total of 888,246 poppies – and lives lost – will be accomplished in time for Remembrance Day 2014.

It’s impossible to stand in front of this growing array and not be conscious of the sheer human cost, and waste, of the great conflict a hundred years ago.

I can’t think of a more powerful way of recognising the reality of the number 888,246 – the population of Greater Liverpool (864,122)?  3½ times the current complement of the British Army plus reserves (865,305)?  Wembley Stadium filled nearly ten times over (900,000)?  No mathematical comparison can make the impact of the spread of red across the green moat of Britain’s oldest fortress.

It’s a work of genius:  http://www.paulcumminsceramics.com/poppies-to-fill-tower-of-london-moat-in-first-world-war-commemoration. 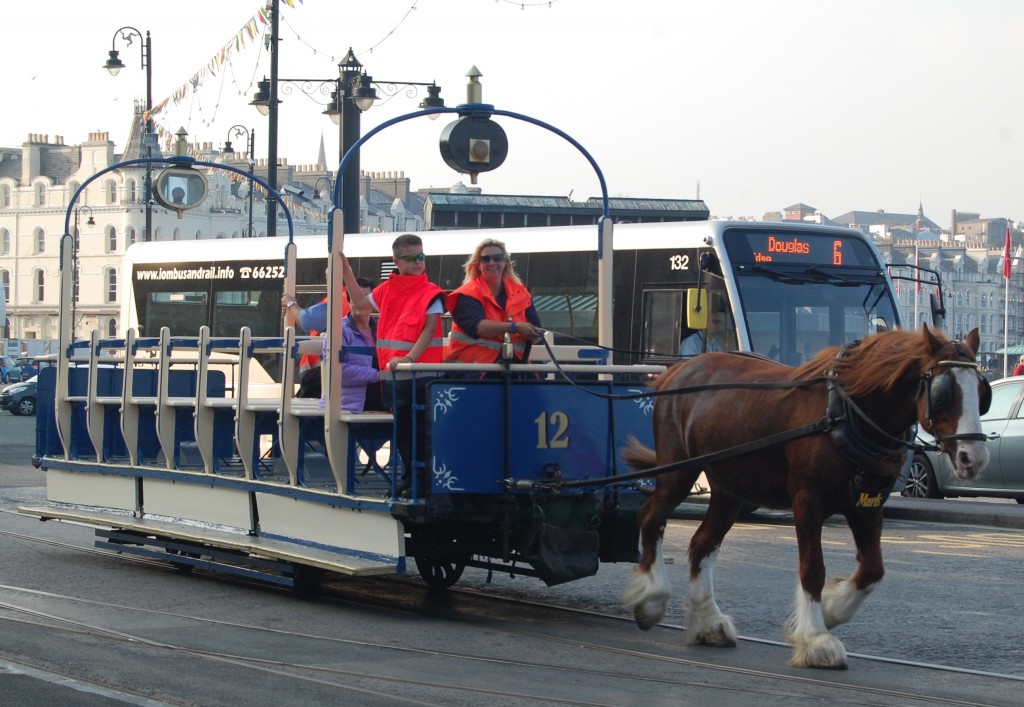 The Douglas horse tramway on the Isle of Man closed down on Sunday September 14th 2014 for an eighteen-month break.

There will be no service in 2015 while almost the entire track, last renewed in the 1930s, is moved sideways to the seaward side of the promenade, which it will share with pedestrians rather than conflict with motor traffic. This will be less dangerous for boarding passengers and more comfortable for the horses:  http://www.iomtoday.co.im/news/isle-of-man-news/last-horse-tram-until-2016-1-6841488.

In the process, the double track will be reduced to single track with passing loops, an acknowledgement that the customary service of two opposing cars, passing once on each journey, doesn’t require the track-capacity that existed when the tramway carried 2¾ million passengers in a summer season.

I’m not convinced that the recent operation of the tramway has made the most of its potential. At long last it’s permissible to use Explorer tickets on the horse trams.  These cost £16.00 for a single day, £47.00 for a week, and provide unlimited access to buses, steam trains and electric trams as well as the horse-trams.

Yet I heard a palpable gulp of astonishment from a horse-tram passenger when asked for £3.00 for a single journey along the promenade: for that sort of money you can get almost anywhere on the island by bus.

I listened recently to a Member of the Legislative Council of Tynwald, the island’s parliament, explain the financial constraints affecting his government. In that context it’s commendable that the Douglas promenade improvements are proceeding, and that the horse tramway is included in the development.

Even so, it’s a pity that in the impending upheaval the opportunity was missed to extend the Manx Electric Railway from Derby Castle, the northern terminus of the horse trams, to the Isle of Man Steam Railway at the other end of town, running the horse cars in between an electric service.

This connection was first proposed in the 1890s by the promoter of what became the Manx Electric Railway, Alexander Bruce.

Just because he was eventually exposed as a fraudster doesn’t mean the idea of a rail link all the way from Ramsey to the south of the island wasn’t a logical and practical idea.

A pattern is emerging elsewhere to show that heritage rail transport is a money-spinner, as the authorities in San Francisco discovered when they had to close down the cable cars for a complete rebuilding.

In Whitby a consortium of public agencies has collaborated with the North Yorkshire Moors Railway to bring steam trains back to the town at a cost of £2 million, with the intention of generating up to £6½ million within the local economy: http://www.bbc.co.uk/news/uk-england-york-north-yorkshire-28803121.

The island’s heritage railways require a £2.3 million subsidy to keep going, yet inject over £11 million into the Manx economy: http://www.iomtoday.co.im/news/isle-of-man-news/taxpayers-cash-for-railway-to-be-cut-1-6830523.

Investing in electrification of the promenade tramway and extending it to the railway station would have been more easily practical now than at any time in the recent past or the foreseeable future.

It’s well outside the box of Manx political thinking, and that’s a shame.

Update:  I assumed when the tram-service closed in September 2014 that the new promenade scheme was fully planned and ready to begin, but it seems not:  http://www.isleofman.com/News/details/67197/trams-could-run-again-next-year.

Further update:  By December 2014 it was clear that the proposed promenade scheme hadn’t been thought through, and it was announced that the horse trams would run, after all, in 2015:  http://www.iomtoday.co.im/news/isle-of-man-news/work-on-douglas-prom-put-off-till-the-autumn-horse-trams-to-run-as-usual-1-7012023.

Yet another update:  In January 2016, after a series of metaphorical U-turns over the future of the horse-trams, Douglas Corporation caused a major row by announcing the immediate and permanent closure of the tramway:  https://www.facebook.com/douglaspromenade/posts/1499226487050596. 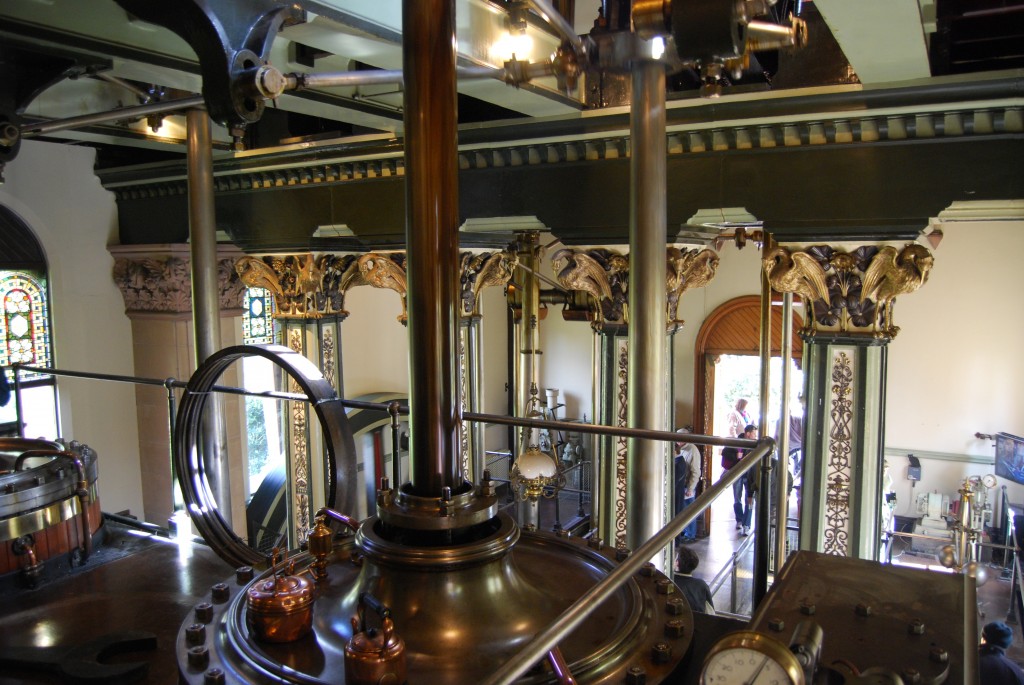 If, while dining in splendour at the Lakeside Restaurant, the former Bestwood Pumping Station outside Nottingham, your imagination wonders how much more splendid the place is than when it was a waterworks, you need only drive up the road to the Papplewick Pumping Station to see a similar installation that was and is even more splendid.

The Papplewick Pumping Station was completed in 1886 after the Waterworks Company was taken over by Nottingham Corporation, and its construction was the responsibility of the engineer Marriott Ogle Tarbotton (1834-1887), who gave Nottingham its sewage system and the present-day Trent Bridge.

The engine house at Papplewick was built of local Bulwell bricks with terracotta and Mansfield stone decorations.  It contains two magnificent James Watt & Co beam engines, which pumped from wells two hundred feet deep.  The building stands off-centre to the ornate cooling pond, suggesting that a second engine-house was considered, though it was not needed.

Papplewick Pumping Station was given the same elaborate architectural treatment and landscaped grounds as Bestwood, but, apparently because the project – even with the ornamentation – cost £55,000, well under the £67,000 budget, it is more richly decorative, with stained glass, carved stone and ornamental brasswork designed around the theme of water and water-creatures.

Brass fish swim between the individually turned brass water-lilies, reeds and bullrushes that decorate the square faces of the columns supporting the engine-beams and gilded ibis embellish the capitals.

The strong resemblance between the Bestwood and Papplewick buildings may indicate the guiding hand of Thomas Hawksley, who acted as an informal mentor to Marriott Ogle Tarbotton.  A letter from James Watt & Co about the design of the engines asked if they could save time and money by adapting features for Hawksley’s Yarmouth waterworks:  “There is a great similarity and we seem to detect Mr Hawksley’s design and ornamentation in your drawings.”

The sheer magnificence of the interior of Papplewick Pumping Station almost certainly saved the engines when it was decommissioned in 1969.  The Bestwood engines were scrapped without controversy in 1968.  The scrap value of the engines at Boughton Pumping Station further north near Ollerton was assessed in 1970 at £10,000, and the proceeds of that sale helped to set up the Preservation Trust that took over Papplewick Pumping Station and brought it back to life:  http://www.papplewickpumpingstation.co.uk/index.htm.

Opening and steaming dates and times at Papplewick Pumping Station are at http://www.papplewickpumpingstation.co.uk/html/dates_-_times.html.

Papplewick Pumping Station  is included in the itinerary of the ‘Cemeteries and Sewerage: the Victorian pursuit of cleanliness’ tour, based in Sheffield, September 17th-21st 2020.  For further details of the tour please click here. 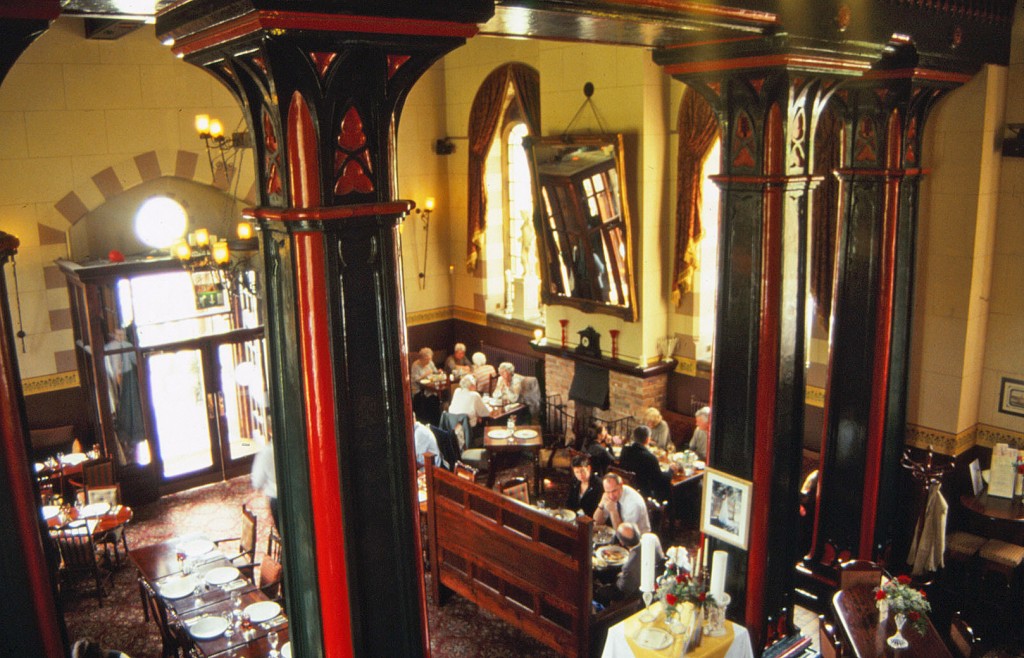 There can be few more splendid places to dine in Nottinghamshire than the Lakeside Restaurant [http://www.lakesidetower.co.uk/fine-dining-in-nottingham/pump-room-restaurant.html], a spectacular conversion of one of Nottingham’s fine Victorian water-supply pumping stations.

Nottingham was the birthplace of one of the greatest British civil engineers of the nineteenth century, Thomas Hawksley (1807-1893), who specialised in water-supply engineering and served as consulting engineer to the Nottingham Waterworks Company.  He was the first to prove it was feasible to provide twenty-four-hour supply, a convenience that made water-closets fully practical.

He was responsible for managing the huge increase in demand as the population of Nottingham grew in the nineteenth century by tapping the abundant supplies of water held in the Bunter Sandstone that lies beneath the town.

The Bestwood Pumping Station, built in 1869-73, was part of that great project.  The brick engine house was built in thirteenth-century French Gothic style with stone facings.

Its architectural splendour was a gesture towards the 10th Duke of St Albans, from whom the six-acre site was leased.  He had rebuilt his nearby residence, Bestwood Lodge, in 1865, so the pumping-station chimney is contained in a 172-feet-high Venetian Gothic staircase tower which leads to a viewing loggia.

The engines were constructed by Joseph Whitham of Leeds, with a capacity of three million gallons per day, drawn from a well 176 feet deep.  They were replaced by electric pumps in 1964 and dismantled in 1968.

Following a steeplejack’s report that the tower was unsafe because of mining subsidence, plans were announced in 1972 to demolish the historic buildings.

Faced with a public outcry, the chairman of Nottingham Corporation Water Committee, Councillor Len Squires (Labour), complained, “Nobody realised the building had any architectural merit whatsoever until we decided to pull it down.”

When the Nottingham Corporation Waterworks Department was taken over by Severn Trent, Bestwood Pumping Station became derelict, listed but unusable, until 1997:  http://www.lakesidetower.co.uk/home/photo-gallery.html.

In fact, its architectural merit made it a superb location for an upmarket restaurant and wedding venue, with a fitness suite in the former boiler house.

The main floor, the Pump Room Restaurant, is flamboyantly decorated in Victorian country-house style, and the beam floor provides a further function room, the Tower Suite.

It’s an indication of the pride that Victorian municipalities took in their utilities that this practical waterworks should so successfully become an elegant place for fine dining.