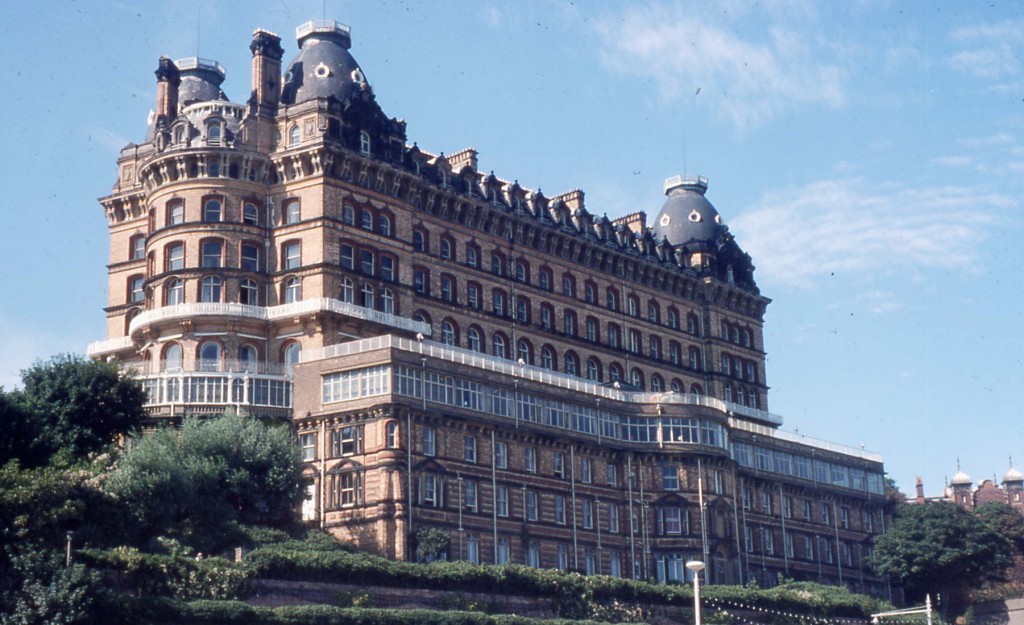 The Grand Hotel, Scarborough dominates the resort’s South Bay.  Its eggcup domes provide an unmistakable skyline, and the wedge-shaped plan, built into the cliff-side, enables it to overlook both the South Bay and the Valley.

Designed by Cuthbert Brodrick, the architect of Leeds Town Hall and the Leeds Corn Exchange, it belongs to the first generation of British hotels on the American pattern of public rooms combined with suites and bedrooms.

Brodrick provided an elaborate top-lit central hall and staircase, and the coffee-room and drawing room each measured 110ft × 80ft with bow windows facing South Cliff and the Spa.

Nikolaus Pevsner characterised its style as “Mixed Renaissance…[with a] touch of Quattrocento…a High Victorian gesture of assertion and confidence, of denial of frivolity and insistence on substance”.  It cost £66,000 to build and opened in 1867.

Legend has it that Brodrick contrived the design to include four towers to represent the seasons, twelve floors for the months, 52 chimneys for the weeks and 365 bedrooms for the days of the year.  If so, it’s a measure of the opulence of the place that the modern configuration, with en-suite facilities, provides 382 bedrooms.

Nowadays the Grand is “grand” in the Yorkshire sense.  After years as a Butlin’s hotel it now belongs to the Britannia chain which owns, among others, the Liverpool Adelphi.  As such it offers budget accommodation in palatial surroundings, with sometimes interesting dissonances.  The last time I walked in the PA system was playing Gene Pitney’s 1964 hit ‘Twenty-four hours from Tulsa’.

In recent years the Grand Hotel has had some unfortunate publicity.  The building now wears a vast hairnet because, apparently, the mating cries of the seagulls disturbed the guests.  In other places, the reverse might have been the case.

The Wikipedia entry is interesting, but its neutrality is disputed:  http://en.wikipedia.org/wiki/Grand_Hotel_(Scarborough).  For the moment, the entry carries a health warning.  As well it might.