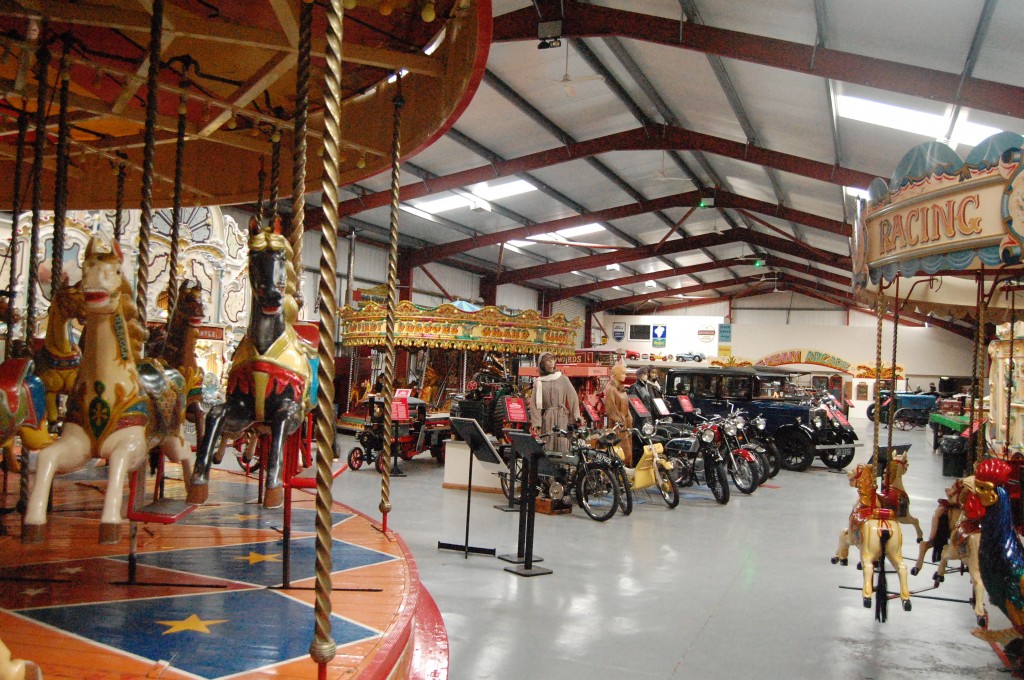 There is a pattern of successful entrepreneurs with a weakness for steam engines collecting historic artefacts as an adjunct to their main business.

George Cushing (1904-2003) at Thursford and Alan Bloom (1906-2005) at Bressingham are fellows in spirit with Graham Atkinson, whose Flower of May Caravan Site at Lebberston, near Scarborough, is the home of the Scarborough Fair Collection, an enjoyable assembly of fairground rides, steam engines, cars, motorbikes and commercial vehicles, embellished with a fine café and a dance hall with two mighty Wurtlitzer cinema organs: http://www.scarboroughfaircollection.com.

Unlike Thursford, which is dark and theatrical, the Scarborough Fair Collection is top lit in daylight. Its rides – including a set of gallopers (c1893), a Noah’s Ark, a set of dodgems and a ghost train – are spread around the building, with helpful notices indicating what time they run. The vehicles and other artefacts are thoroughly labelled, so that it’s possible to understand their significance – and in some cases, considerable rarity – even if you’re not an aficionado.

Among its treasures it boasts four showmen’s engines (one of them The Iron Maiden, star of the 1962 film of the same name), a Foden steam wagon, a magnificent 1937 Scammell showman’s tractor, The Moonraker, and a fully restored showman’s caravan.

There are several mechanical organs,–

– as well as a small example of a calliope, originally a fearsome contraption that could be heard for miles made for riverboats from locomotive whistles.

Tea dances take place on Wednesday afternoons, using the two Wurlitzers. They are an interesting pair, respectively from the Granada cinemas at Mansfield, Nottinghamshire (1936) and Greenford, west London (1937).

The Scarborough Fair Collection has much to fascinate enthusiasts for steam, motor vehicles, mechanical music, organs and all the fun of the fair, while at the same time entertaining those who enjoy wallowing in nostalgia over a cup of tea and a cake.